Former presidential candidate Liadh Ní Riada MEP has been proud to represent Sinn Féin at European level and hopes to continue that work by securing a second term on May 24.

Hailing from the Gaeltacht area of Cúil Aodha-Baile Bhúirne, Mhuscraí, Riada has consistently been ranked as one of the hardest working MEPs in Ireland.

‘It’s been my honour to have served as Sinn Féin MEP for Ireland South for the past five years,’ she said in conversation with The Southern Star.

‘I hope to continue the work that I've started. When it comes to productivity and legislation that doesn't come about by sitting and twiddling your thumbs.

‘The driving force behind any work I do in the EU Parliament is to ask if it’s going to benefit our rural and coastal communities.’

Having sat as a co-ordinator on an EU budgets committee as well as on the fisheries and cultural committees, Ní Riada is strong believer in continuity.

‘It’s really important that there is continuity because we always look ahead to the next seven years. You build up credibility with other MEPs so you have a connection between Ireland and Europe.

‘You can’t become an MEP just to disappear to Brussels and never be seen again. That’s not how it works. When you vote Sinn Féin, you’re getting local, national and European drive,’ she says.

Regarding her role on the fisheries committee, Liadh says ‘it’s about protecting the rights we do have. We are going to see an awful lot of boats coming in and getting more of the quota of which we have a very thin slice of, so it’s important that we argue a fair deal for our coastal communities.’

Ní Riada is a firm believer that it is of the utmost importance for MEPs to ‘be Ireland’s voice in the EU and not EU’s voice in Ireland.

‘We absolutely have to protect our neutrality and our sovereignty. There is a move towards militarization with €13 billion going towards the creation of an EU army. We can’t have that,’ she says. 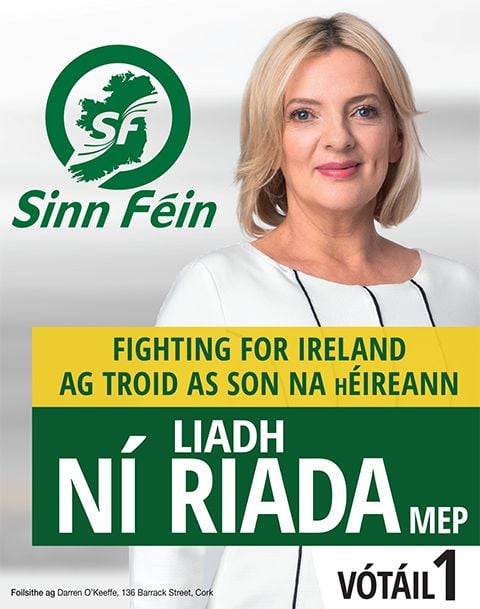 Unsurprisingly, one of the major issues raised on the campaign trail has been Brexit and Ní Riada is steadfast in her belief that Sinn Féin have done their utmost to protect Irish interests in that respect.

‘When the Brexit vote was cast, we [Sinn Féin] were the first out the traps as MEPs to ensure getting specially designated status for the six counties that needed democratic representation.’

If you want to have a strong Republican voice in Europe, give your number one vote to Liadh Ní Riada in the European Elections on May 24.