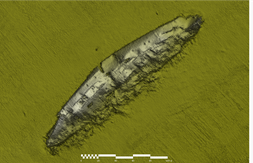 NEW sonar images of the wreck of the Lusitania have been released by the Department of Arts, Heritage and the Gaeltacht.

Members of a team from the Geological Survey of Ireland (GSI) and the National Monuments Service of the Department of Arts released the pictures this week.

The images, say experts, reveal the current condition of the RMS Lusitania on the seafloor, exactly 100 years after its sinking, this week in 1915.

The photos reveal the ship ‘in greater detail than ever before’, according to the Department of Communications, which unveiled the images.

The imagery provides a sense of the scale and history of the site, a tangible connection to the wreck, and to the dramatic and tragic events that surrounded its sinking, the Dept said. 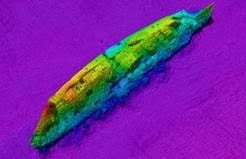 The wreck is 240m long, standing 14m high above the seabed

The 240m long vessel is clearly defined on the sea floor, lying on its starboard side and standing over 14m high above the seabed.

Minister of State, Joe McHugh said this week that ‘the new imagery of the Lusitania provides a solid framework upon which new research and analysis can be based’.

The imagery will provide important information on how the shipwreck has changed over the last 100 years, Arts minister Heather Humphreys added.

The photos come to light just days after diver and historian Paddy O’Sullivan criticised her Department for continuing to enforce a heritage order at the site, which means that only Dept-authorised divers can visit it.

Speaking to last week’s Southern Star, he said historians were ‘tantalisingly near’ solving the mysteries surrounding its sinking, but the heritage order prevented this.

This week the government said the new sonar images were ‘extremely important from a site protection point of view. It will add to our knowledge and understanding of the wreck site on the seabed, its current condition and how the site has changed or degraded over the years.’

‘Additionally, the data, in tandem with previous information from individual divers to the site, will be very beneficial in developing our understanding of the physical processes at play at the wreck site and in the surrounding seabed and should help inform long term management strategies for protecting, investigating and conserving the wreck,’ it added.

‘One hundred years on, the Lusitania is beginning to reveal its wounds, scars and perhaps its secrets, and may continue to do so for many years to come,’ a statement concluded.

One of the main visitors to Kinsale for the ship’s commemoration events this week is Lusitania wreck owner Greg Bemis, who also remains critical of the government’s stance on access to the wreck.