A WEST Cork man with a love of pigs is embarking on a journey of breeding a domestic type which originally hails from New Zealand.

Shane Kenneally, who lives in Dundeady, Castlefreke, has recently invested in some KuneKune pigs, and believes he’s the first farmer in Cork to do so.

Pronounced ‘cooney cooney’, it translates as ‘fat and round’ in Maori, and these pigs are known for being more docile and gentle than your average breed.

Shane, who is originally from Galley Head, also works off-farm as an operative in Janssen Pharmaceutical in Ringaskiddy.

His grandparents on both sides kept pigs, which prompted his interest in the animal.

‘I have kept hens for years, starting off with four and rising up to 27. Sadly, we were devastated by a mink attack last year, who killed our beautiful rooster Richie and 11 hens including our broody hen, who had the chicks,’ said Shane. 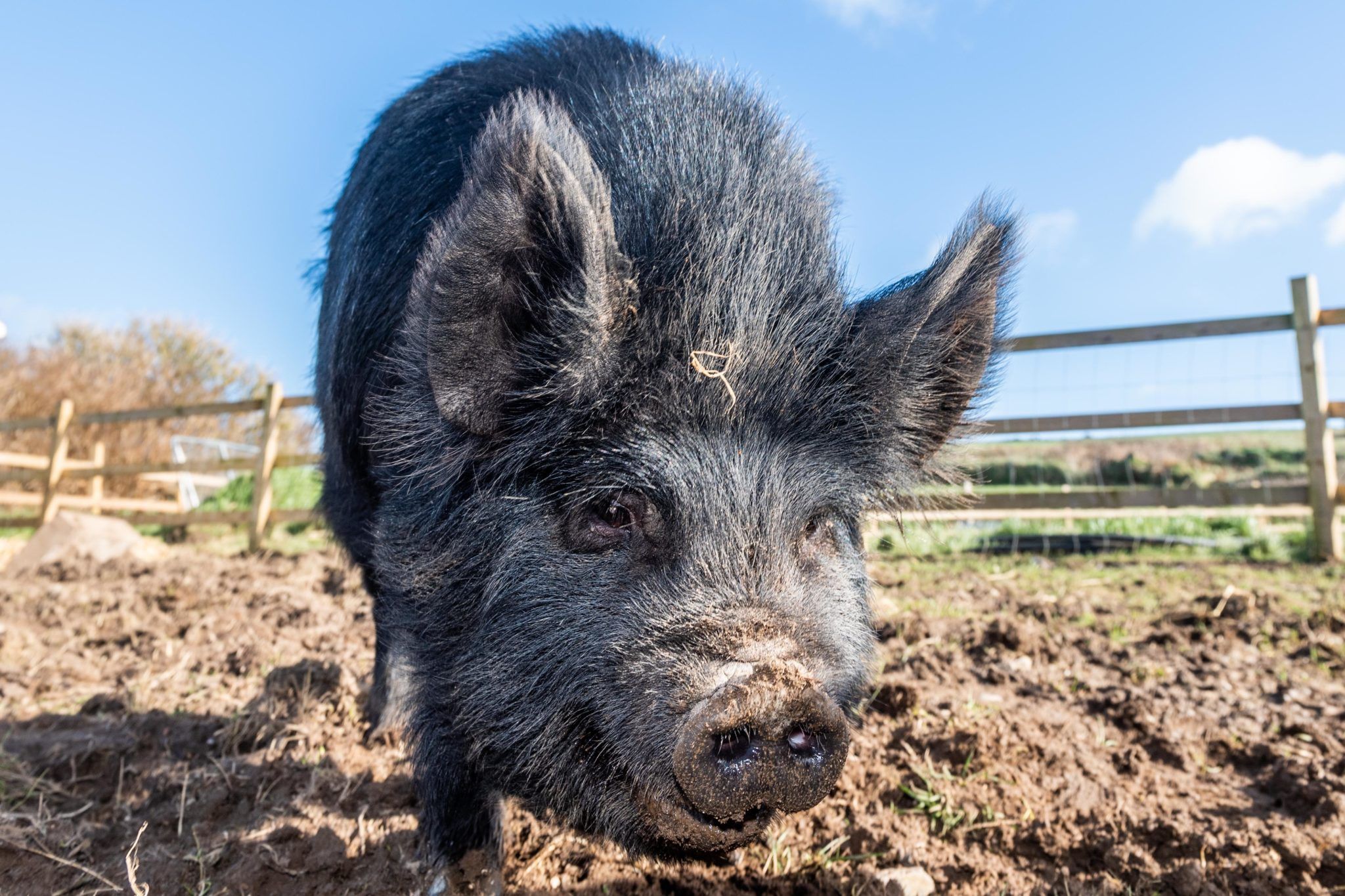 Married to Amy from Clonakilty, they are parents to five-year-old Sean and three-year-old Hope.

‘We bought a house last year and renovated it, and it’s now our family home. I suppose the pigs were the next step up from the chickens, and we were fortunate enough to have an acre of land with the new house, so I fenced off an area, piped mains water to the paddock and myself and my dad built a house for them. We were inspected by the Department of Agriculture and it was all systems go from there.’

Shane did a lot of research around what type of pig to get.

‘I came across the KuneKune and did a bit of homework on them. They are very quiet by nature and very safe pigs to have around children, and they don’t grow to the size of a normal pig.’

Shane decided immediately that he would breed the New Zealand pigs for sale as opposed to rearing them for meat.

‘We have hatched out chicks from our hens before and it’s great for the kids to grow up in this environment,’ he said.

Next, he joined the British KuneKune pig society (BKKPS) and contacted the Irish rep and bought his first two pigs from him – a six-month-old gilt (female pig, not yet after any litter of piglets) and a boar, as pigs are companion animals. Called Moana and Sky, they are both purebred registered pigs. 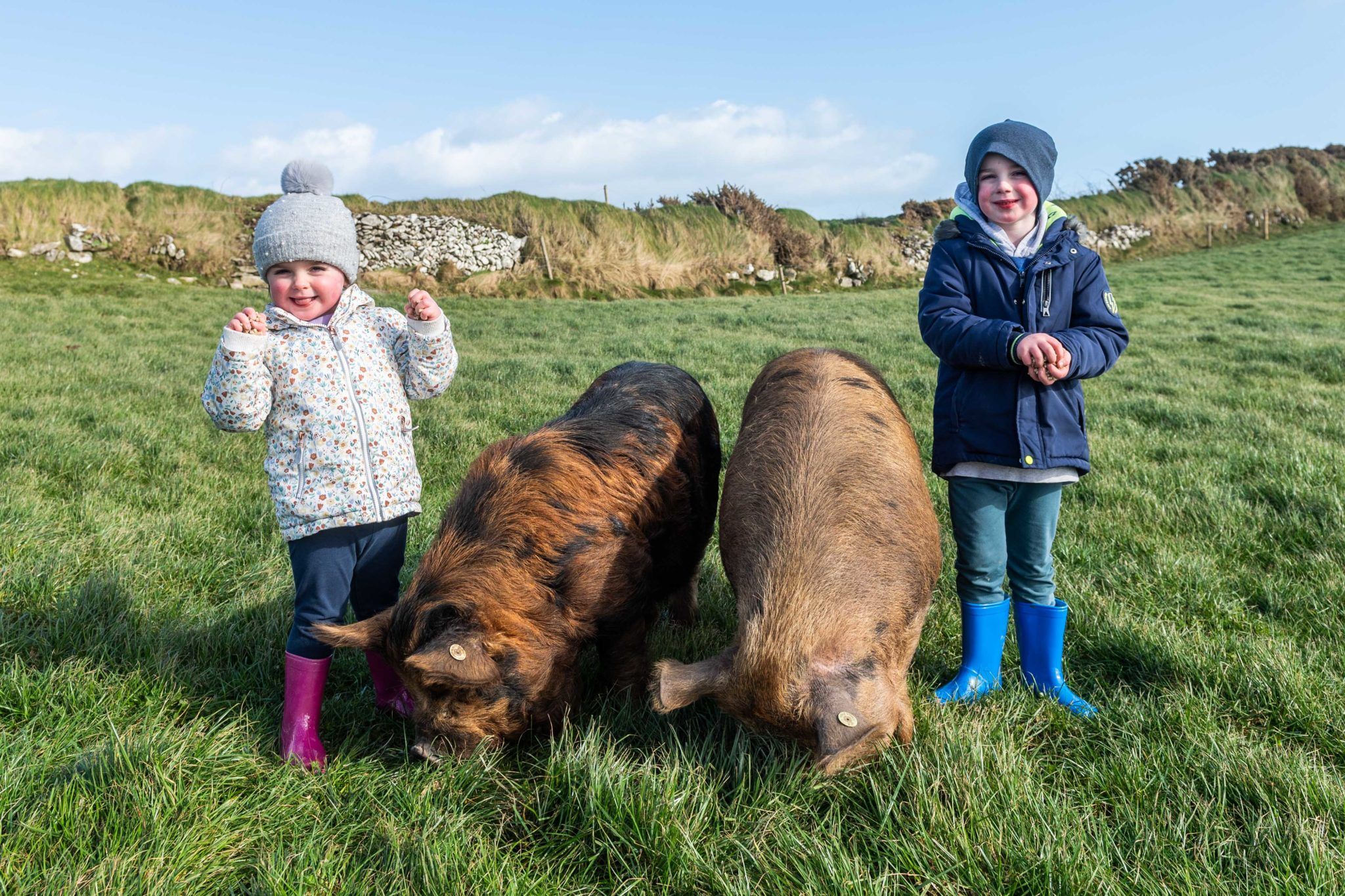 Hope and Sean with Donal and Winky. (Photo: Andy Gibson)

Initially, it was only to be these two, but Shane said ‘as usual’ it wasn’t long before he expanded.

‘A two-year-old sow Winky (a female, already after carrying a litter of piglets) became available so we decided to invest. The options for a mate with her were extremely scarce – one boar in Fermanagh and one in Clonmel. When you decide to breed two KuneKune pigs a check is done called the ‘coefficienct of inbreeding’ to ensure there is no relation between the two. We were lucky enough to secure the services of the boar in Clonmel as the boar in Fermanagh was 6.5hrs away! I set off recently at 4am, collected Winky in Kiltimagh, Co Mayo, and then went onto Clonmel to collect Donal our visiting boar, covering 740kms in total. Donal is now staying with us for eight weeks covering two heat cycles with Winky.’

Shane said the volume of purebred registered KuneKune pigs is quite low compared to other breeds, and with responsible breeding his hope is to expand the breed pool and options for breeders in Ireland.

He has also joined the Irish Pig Society to educate himself further and has generously offered advice to anyone  interested in keeping the animals.

‘We hope to have our first litter of piglets for sale in the summer.’