THE Skibbereen Flood Committee says the town is getting closer to construction of the scheme, following their meeting at Leinster House last week with Simon Harris TD, Minister of State with special responsibility for the OPW and Public Procurement. 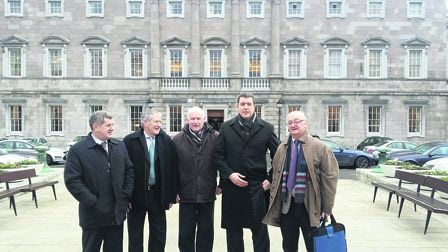 THE Skibbereen Flood Committee says the town is getting closer to construction of the scheme, following their meeting at Leinster House last week with Simon Harris TD, Minister of State with special responsibility for the OPW and Public Procurement.

Over the last four years, there have been six near misses where another two hours’ rain, spring tide, or change in wind direction could have had severe consequences, the committee has pointed out.

This is a potentially very serious situation now, as most people in the area no longer have any flood insurance cover, committee chairperson Cathal O’Donovan said this week.

‘Because of the history of flooding and the last major flood event in 2009, effort had to be directed to planning for a €14m Flood Relief Scheme for Skibbereen,’ he explained, adding that it has been designed to provide a 200-year flood event protection for 179 homes and 131 commercial properties.

This has been underway since 2010 and resulted in the public consultation in 2011, an information day in 2012 and the public exhibition of plans in 2013.These fed into the Stage 3 Detailed Design which is now 99% complete.

‘There has been ongoing consultation with landowners, private householders and businesses, and at the same time the dotting of a lot of i's and the crossing of a lot of t's by the OPW as managers of the scheme,’ said Mr O’Donovan.

Cork Council County is the OPW’s agent, and the consultants are RPS.

The Scheme is now at the final procurement stage before construction. This is a two-stage process. In the first stage, eight contractors have now pre-qualified from an original list of 21, which included 60 specialist sub-contractors. Letters have been sent to the successful and unsuccessful applicants.

The second stage involves the eight successful applicants tendering for the scheme. The date for this is mid-February.

It is projected that the main works contractor will be appointed by the end of March and work on the ground will commence in May or June, taking two years to complete.