I DON’T know about you but the lead-up to Christmas is one of my favourite times of the year.

The Toy Show is on the way, the car stereo is tuned to Christmas FM, and Chris Rea is about to set off on his annual two-month drive back home.

For me, once the clocks go back and the evenings get darker, my mind travels back to Ashe Street Clonakilty in the 1980s.

In my mind’s eye, I’m looking out the window of my mother’s children’s boutique at all the other glowing shopfronts festooned in Christmas decorations around Astna Square.

There was always such a buzz around the town around this time of year which I’m delighted to say survives to this day.

It’s easy to forget that all these small business owners and shopkeepers are the real heroes of our local economies.

They put their necks and reputations on the line to follow an idea and make it happen, from small bakeries to clothes shops to start-up food companies.

West Cork has these entrepreneurs in growing abundance and a local populace that has always taken supporting them seriously. These business people are the engine of our communities – their creativity enriches our lives and employs our youth and their products travel out of West Cork and take our story with them around the world. And boy, have they been put through the wringer in the last 18 months.

This week, a very funny sign popped up on a roadside in Kerry featuring a photo of Amazon chief executive Jeff Bezos with the tagline ‘Shop Local This Year – this fella has enough’.

It went viral on Twitter, a really great little bit of guerilla marketing, and was a gentle reminder of what we should all aspire to do in the weeks of Christmas shopping to come.

The West Cork Business Network estimates that for every €1 spent in a local shop, a further €4 is generated in the local economy. This year, more than any, we need to support those local businesses.

The simplicity of the one-click purchase on Amazon and the other major retailers is such a temptation, especially when you’ve got a long shopping list.

I’m as guilty as the next fella but we know the effect of Amazon and how it has helped to hollow out main street businesses across the US. Do we really want to part-fund some billionaire’s ambitions to live on Mars and see the same thing happen to our local enterprises here? Small actions matter.

As with climate action, our personal choices seem insignificant and pointless until enough of us start to make the right ones. 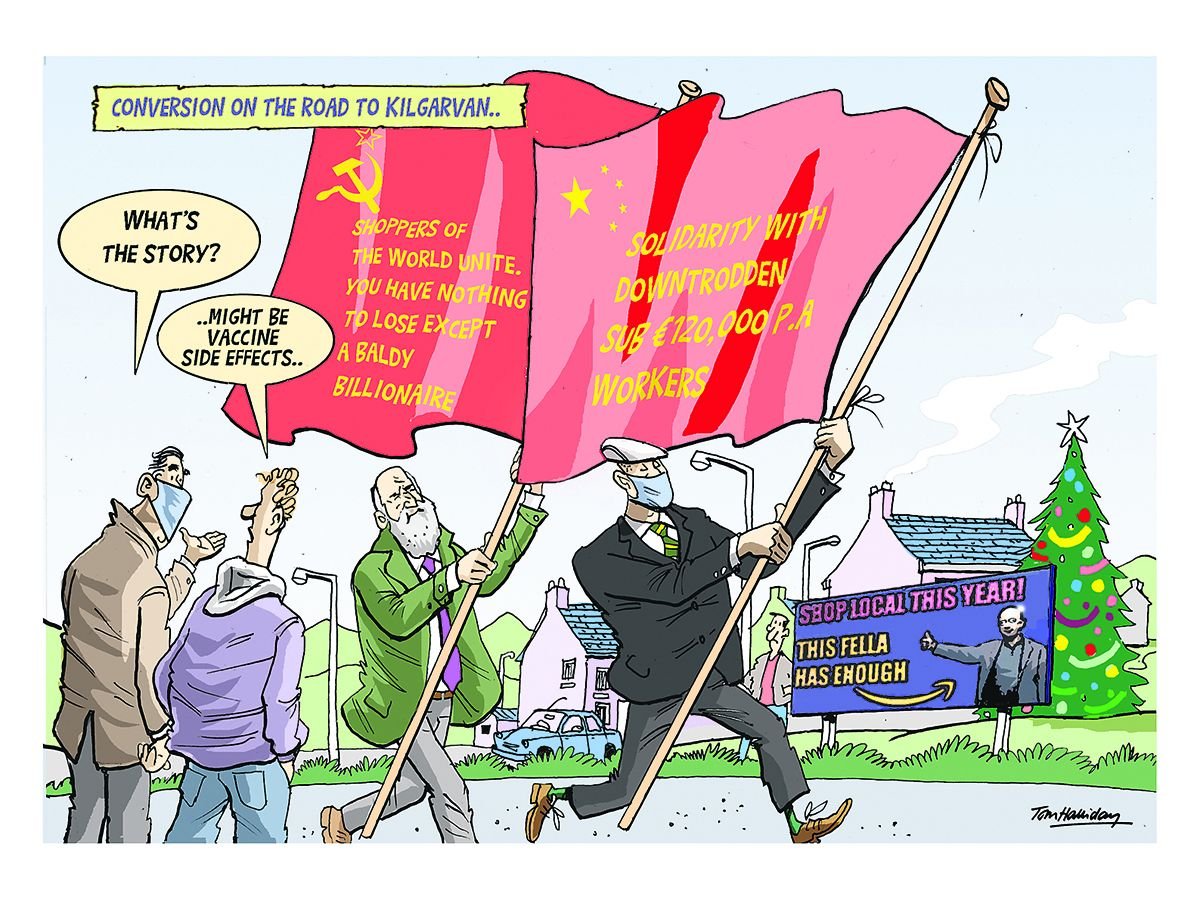 New feather in his cap

SPEAKING of the power of collective action, The Sunday Times reported a bit of a ‘red scare’ at the meeting of the Rural Independent Group last week. At the meeting, Independent TD Michael Healy Rae, who is not usually known for his collectivist leanings, called for the abolition of the Universal Social Charge for those earning under €70,000. So what, says you? Sure there’s nothing he wouldn’t put a cap on.

What really raised some eyebrows, though, was Healy Rae’s suggestion for replacing the USC.

He mooted a ‘solidarity tax’ on those earning over €120,000 or on corporations earning profits of more than €1.5m. Such a sudden, unexpected lurch to the left has not been seen since The Gooch last played Fitzgerald Stadium. Even Richard Boyd Barrett was taken aback, and quick to applaud the deputy for his newfound socialism.

It’s arguable that Healy Rae was simply just engaging in a bit of ‘aul populism aimed at his constituents. There would be form there, in all fairness.

But I say let’s hear the man out. Perhaps he’s had a Road to Damascus-style political conversion?

Maybe next week he’ll be offering to nationalise his own sizable property portfolio in solidarity with Generation Rent? Maybe Danny will follow suit and donate a few diggers to the Housing For All plan?

Proletariat of The Kingdom, unite!

I WAS perplexed when Fine Gael TD Bernard Durkan took the rather unusual step of calling for an audit and investigation into the National Lottery on account of the jackpot not having been won in almost six months.

On first reading, this sounded like a daft suggestion – that fella must be a few numbers short of a quick pick, I thought to myself.

But Durkan doesn’t believe ‘anything odd has happened’ instead he is protesting about the increase in the number of balls from 36 to 47 which he believes should never have happened. He’s right, of course.

The odds of winning have lengthened dramatically as a result and, like many things in Ireland these days, from buying a house to getting the points for a university course, the game seems to be stacked against the ordinary Joe.

After all, it is every Irish person’s right to dream of one day becoming a Harley Davidson-riding granny or owning their own island off the coast of Africa.

To whoever eventually wins the current jackpot, estimated to be north of €145m, please remember to support your local businesses this Christmas.

Or maybe even start a few. But be careful. There’s a socialist revolution happening in Kerry, and they might be coming for you next!