FATHER Gerard Galvin will always be remembered for his compassion, his humanity and his devotion to the community.

These were just some of the tributes paid to ‘Fr Ger’, who sadly passed away last week, by his countless friends and those who were lucky enough to be part of his life on the Sheep’s Head peninsula in his parish of Muintir Bháire.

‘Fr Ger served us very well as our PP and he will be sadly missed by all who knew him,’ retired local garda and Durrus resident Brendan O’Dwyer said.

‘His homilies were always thought-provoking, no matter how difficult the subject and Fr Ger was never afraid to put the teaching of the gospel and the people first.’

It was after one such sermon, where Fr Ger castigated the church for its failure to safeguard the innocent, following the Tuam babies revelations, that the well-loved priest received a loud round of applause. 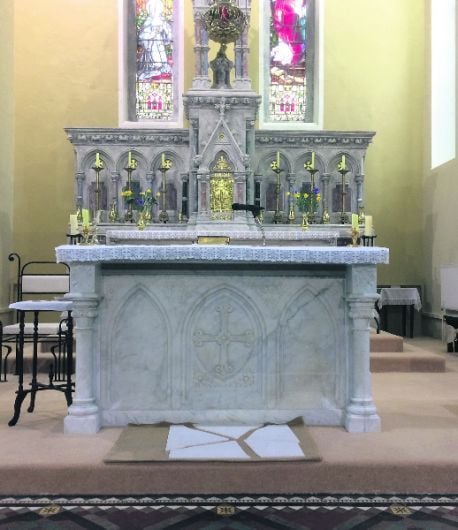 Fr Ger Galvin's tile which he symbolically broke on the altar when he criticised the treatment of the Tuam babies, in 2017.

Fr Ger had placed a pristine white tile, that had been shattered, on a rough cloth in front of the altar. ‘The tile represents the shattered lives of the victims of all types of abuse and the rough cloth represents the rough justice that many received when they told of their abuse,’ Fr Ger told the gathered congregation, in March 2017.

However, it is Fr Ger’s humour and sense of fun that will also be missed, especially during the Ahakista Festival where a certain local resident, celebrity host, writer, BBC presenter and festival quizmaster, Graham Norton once joked that the local parish priest was ‘a lot less trouble than Lady Gaga’ to deal with.

‘Fr Ger was always wonderful with everyone even when he wasn’t feeling particularly well himself,’ Annette Nicholas from Ahakista said. ‘He will be sadly missed, especially by the children attending the national schools on the peninsula, who always looked forward to Fr Ger calling to their schools and at their First Communion. Our lives, our parish and our community will miss him dearly. ’

This was a sentiment echoed by Bishop of Cork and Ross, Fintan Gavin.

‘Fr Gerard was a gifted priest and he was generous in sharing those gifts with people in his different pastoral appointments in the Diocese.   He will be greatly missed by his former parishioners but above all by his family and many friends. May Fr Ger rest in peace.’

It was also well known that Fr Ger not only loved good food, but was an excellent cook as well. In fact, one of the most sought-after prizes at the Ahakista summer festival quiz night was a dinner cooked by Fr Ger himself – in the parochial house in Durrus.

Fr Ger took up his post as parish priest on the peninsula in 2009, but due to his illness, he was reluctantly forced to retire from his ministry earlier this year.

In an emotional farewell, posted online, he asked for prayers and forgiveness as he explained that he had incurable cancer in his bones and lungs. ‘I wish it wasn’t like this, I wish I could shake your hands and say goodbye, but I can’t, I don’t have the energy anymore,’ Fr Ger said, as he teared up before the camera.

Remembering better times, Durrus resident Gerard Burke said: ‘One aspect of Fr Galvin’s ministry, which will be remembered, was his dedication to ecumenism and his openness to other religions.

‘Following his arrival in Durrus, this was highlighted by a completely new innovation when, each Good Friday, the Stations of the Cross took place along a route where a series of crosses had been erected, beginning at the Catholic church and ending at the Church of Ireland. This aspect of his life was confirmed by the fact that he requested Rev Anne Skuce of the Church of Ireland to give the eulogy at his funeral on Saturday last.’