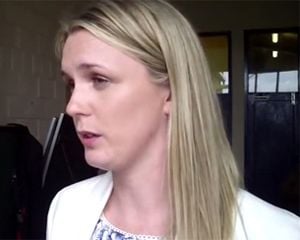 SINN Féin’s general election candidate for Cork South West has criticised news that PPS numbers will be required by Irish Water for customers to receive the so-called ‘conservation grant’.

Cllr Rachel McCarthy said homes will be receiving letters in the next few days asking them to register with Irish Water and giving their PPS numbers in order to receive the €100 grant. ‘Irish people have to jump through yet more hoops and submit sensitive information to yet another government agency to receive a grant which no longer has a purpose,’ she said.

‘Not only is this a huge expense – €6m for administration costs alone – it is bizarre that the government are now asking people to provide their PPS numbers after having withdrawn requests for this information last year. It is yet another example of the farce that is Irish Water, as if further proof was needed,’ she added.

Cllr McCarthy said that we must also have clear guidelines on the demarcation between the Department and Irish Water when it comes to processing the grant. ‘With the government refusing to rule out privatisation of Irish Water, this confidential information could be shared with private commercial enterprises in the future,’ she claimed. ‘If in government, Sinn Féin would abolish Irish Water and domestic water charges. With the upcoming Right2Water demonstration this Saturday, I strongly urge everyone to participate and show their discontent with the ridiculous show of incompetence that is Irish Water and the government’s gross mismanagement of the entire project.’

Her party colleague, Cllr Paul Hayes earlier called on people from all communities across the country to support next Saturday’s protest.

Cllr Hayes said: ‘It’s clear that the Government strategy on water provision is floundering. Their approach from the outset has been completely shambolic and would almost be laughable if it weren’t for the millions of euros that have been wasted. Frustrations have built up also with the fact that many roads in West Cork have not been maintained or re-surfaced, due to delays in pipe laying and improvements to the water infrastructure,’ he said.

‘From Bandon to Bantry and beyond, the roads are disintegrating and badly need to be resurfaced. However, works are being delayed and postponed while Irish Water drags its feet on its water network projects. Rural dwellers are contacting me with their frustrations of being charged on the double for water, as they receive a water bill from the County Council for their water use on their land, and another bill from Irish Water for their domestic water, when previously they would have received an allowance for domestic use from the County Council.’

Regarding next weekend’s marches, he said that the people of West Cork ‘have an opportunity to send this government the loudest message yet that the opposition and resistance to water charges is as strong as ever.’