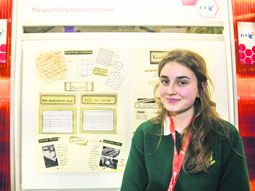 Coláiste and Gaelcholáiste Choilm in Ballincollig took home a total of seven awards in various categories and levels, for projects ranging from e-cigarettes to marathon kayaking safety.

Clonakilty Community College students were highly commended for their project investigating the effect of LEDs on Plant Growth.

Schull Community College students were named as group runners-up of the intermediate Social & Behavioural Sciences category for their project ‘Stand Up, Stand Out!’ by students Elyssa Curran, Aishling Connolly and India Bartholomew. Their colleagues Tarah Fleming and Aoife Nash were highly commended in the Biological & Ecological Sciences category for their project investigating Ireland’s line-caught pollock.

Bandon Grammar School came second in the Junior groups in the Biological and Ecological Sciences and were Highly Commended in the Social and Behavioural Sciences for a project on Twitter by Ben O’Regan.

Carriagline Community School took the second prize in the Senior group in the Social and Behavioural Sciences category.