The Astrid on a barge in Kinsale. Pic. John Allen

CONTAMINATION of the fuel tanks on the Astrid was among the reasons cited for the disaster near Oysterhaven on July 24 2013, a damning report has stated. 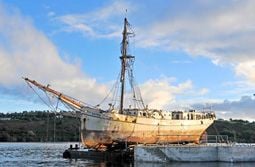 The Astrid on a barge in Kinsale. (Photo: John Allen)

CONTAMINATION of the fuel tanks on the Astrid was among the reasons cited for the disaster near Oysterhaven on July 24 2013, a damning report has stated.

The Marine Casualty Investigation Board has concluded that the ship, in its condition on the day, ‘should not have been at sea’. It said that the engines failed as a result of the fuel contamination, leading to the eventual sinking of the sail training vessel, after a major rescue of its 30 passengers off the Cork coast.

The report, issued this week, concludes that the contamination of the fuel tanks was due to ‘human error’ when water was taken on in Brighton, 12 days earlier, and ‘insufficient action’ was taken to remove it, once discovered.

It further concluded that the route taken appeared to have been influenced by the ‘desire’ for photographs of the Gathering event, and the planned route from Oysterhaven to Kinsale was ‘inadequate for a ship to navigate a course within 300m of a lee shore in a Force 6 wind’.

Futhermore, an incorrect Mayday message was sent out from the ship, delaying emergency services by ten minutes.

‘The ship was not certified as a passenger ship for either EU or international voyages, nor were the crew appropriately certified, and the ship should not have been at sea,’ the report added.

The authors suggested the Transport Minister should explore mechanisms to ensure ‘that sail training ships entering Irish waters and ports comply with the requirements of the International Conventions and EU Law.’

In what appears to be a reference to that night’s Gathering Cruise event, the report suggests that: ‘Ships engaged in any promotional activities must ensure that the Master has over-riding authority and must not compromise good passage planning or the safety of the ship and persons on-board when engaged in such activities.’