EU Farm Ministers travelled to Brussels for the first Agriculture and Fisheries Council under the Latvian Presidency on Monday 26th. 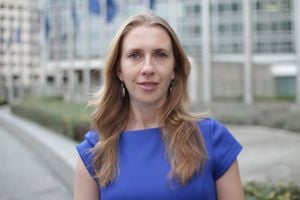 THERE was a blanket of snow on the ground when I awoke on January 24th as the cold snap gripped much of Northern Europe. But conditions were milder and the snow was long gone when EU Farm Ministers travelled to Brussels for the first Agriculture and Fisheries Council under the Latvian Presidency on Monday 26th.

The gathering kicked off just after 10am and the Russian food import ban dominated proceedings, as Moscow might be prepared to re-open its market to certain European agricultural goods – such as pigmeat products, meal, fat, lard and ware potatoes – from countries that respect EU wide certification schemes and pass inspections by the Russian authorities. The ban was introduced following the detection of African Swine Fever – that is harmless to humans but deadly to pigs – in Poland and Lithuania in January 2014 ahead of a wider restriction on EU food imports from August 2014.

The move follows technical meetings between top EU and Russian veterinary officials in the margins of the International Green Week in Berlin two weeks ago (January 15-24). But the Commission was clear that Member States should refrain from holding bilateral talks with Moscow towards lifting Russia’s food import ban for their own products, allowing a common EU solution to be reached.

The EU Health Commissioner Vytenis Andriukaitis (Lithuania) insisted that countries should remain united and bilateral talks with Moscow were unacceptable. Latvia and its fellow Baltic States – backed by Poland, UK and Slovenia – were strongest in demanding unity in the face of the ban that has been in force since early August 2014. Technical discussions are still on-going and more details are expected to emerge in the coming days.

At the same meeting, Commissioner Phil Hogan announced the extension of Private Storage Aid (PSA) for butter and Skimmed Milk Powder (SMP) until the end of September 2015 to provide further safety net support for dairy farmers, hit by the recent dip in prices. The Commission closed the system of PSA for cheese at the end of September last year after Italy notified over 74,200 tonnes (!) of high quality cheese from regions that were not traditionally exporting significant quantities to Russia. Although the market instrument has yet to be used – as prices are so low - public intervention for butter and SMP has been open since January 1 and will remain available to farmers until September 30.

This month’s EU Farm Council marked the debut appearance of the newly-appointed Secretary General of the Irish Department of Agriculture Aidan O’Driscoll, who stood in for Farm Minister Simon Coveney.

Originally from the scenic village of Ballydehob, O’Driscoll served as Assistant Secretary General since 2001 with his most recent responsibilities including EU affairs, Economics and Climate Change. Commenting earlier this month, Coveney expressed his ‘confidence in Mr O’Driscoll to provide the leadership, intelligence and ambition to deliver for Irish Agriculture, the food industry and the marine sector into the future’.

The Minister spoke of ‘an exciting time for the agri-food industry with the abolition of milk quotas in April and prospects presented by new and emerging markets’. But the well-experienced West Cork man, who joined the Department of Agriculture and Food in 1977 and emerged as a key player during tough CAP negotiations in 2013, has a hard act to follow as he takes over the reins from the astute Tom Moran who held the post for ten years.

The Farm Council meeting was wrapped up at around 6.30pm and ministers will meet next on March 16 – on the eve of Saint Patrick’s Day – as there is no gathering scheduled next month. Got a feeling proceedings might finish just a little earlier in March!