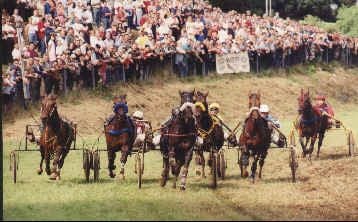 DUE to the cost of insurance, the committee involved in the Ballabuidhe Horse Fair in Dunmanway cannot insure the fair, or close the streets, but the fair will go ahead regardless, this coming week.

The result is that traffic will be allowed to travel through the town centre – part of the main Cork to Bantry route – as the horse fair takes places on the streets, though local gardai have said they will be on hand to monitor proceedings.

The fair, which dates back to 1615, is celebrating its 400th anniversary this year, but now the issue relating to the cost of insurance has cast a shadow over the four-day event.

The event – one of the oldest in Ireland – typically starts on the Sunday, (August 2nd), with the first of three days racing, followed, from 4pm on Tuesday evening, with an event that is known as ‘the gathering’ for the horse fair – an event that also runs all day Wednesday.

The organisers of Ballabuidhe Horse Fair got a nasty shock two weeks ago when they received the insurance quote for this year’s races and fair – it amounted to it €15,850 – a figure that was beyond the reach of the committee. It has now been confirmed that insurance cover has been secured to cover the cost of the three days of racing, an insurance quote that came in at €2,050.

However, there is no insurance cover for the Ballabuidhe Horse Fair, which is held on Market Square, West Green and Bridge St. The traditional standing ground of the horse fair had been the Market Square but, due to the influx of market traders, the horse fair was forced onto private ground in recent years, but that ground can no longer be insured at current rates.

One local person, who has participated in the fair since the 60s, said: ‘Even without insurance, the horse fair will go ahead. It is a 400-year tradition that continued right through the Famine. Nothing ever stopped it – not even an attempt by the Auxiliaries – and nothing ever will.’

Gda Supt Ger O’Mahony told The Southern Star: ‘Previously, the fair was held in an enclosed yard, which worked very well. Unfortunately that location is no longer available, so it may have implications for traffic movement in the town.’

He said gardai would be on hand to direct traffic ‘as the need arises’, and he appealed to people to ‘be patient’ because with a large amount of people attending there may be delays and traffic disruptions.