A retired detective garda has denied he was so convinced Ian Bailey had murdered Sophie Toscan du Plantier that he was 'scratching around' for any evidence when gardai had none. 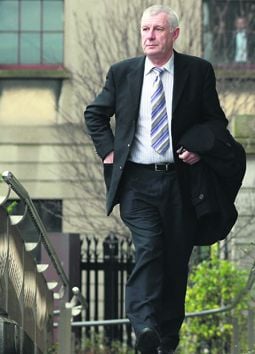 A RETIRED detective garda has denied he was so convinced Ian Bailey had murdered Sophie Toscan du Plantier that he was ‘scratching around’ for any evidence when gardai had none.

Jim Fitzgerald denied he was prejudiced against Mr Bailey, giving evidence in court this week. He said he was investigating a ‘very serious’ murder, did not know Mr Bailey at the time of his first arrest and it was wrong to suggest he was convinced of his guilt.

He agreed things have gone wrong in other cases and, asked about Frank McBrearty and gardai in Donegal, said he had no involvement in that and it was ‘entirely unfair’ for counsel to bring that in. Mr Bailey had not been charged, he added.

The cross-examination of Mr Fitzgerald concluded yesterday on the 51st day of the civil action by Mr Bailey against the Garda Commissioner and State over the investigation into the murder of Ms du Plantier, whose body was found near Toormore, Schull, on the morning of December 23rd 1996. The defendants deny all Mr Bailey’s claims, including wrongful arrest and conspiracy.

Garda Anthony Finn said he was attached to Goleen, a sub-station of Schull, in 2004 and 2005 when he had dealings with Marie Farrell’s family. He stopped her son Michael, then aged 17, when driving in January 2004 and again in October, December 2004 and March 2005 concerning motor tax and insurance.

He met Michael and his parents on one occasion at East End, Schull. When Chris Farrell asked why he had stopped his son, Garda Finn said he told Mr Farrell it related to road traffic matters. Mr Farrell was quite irate and said he had better not stop him again on his own because he would not be able to ‘handle’ him, he said.

He said he jokingly called David Farrell a ‘bollocks’ having genuinely mistaken him from behind on a street in Schull for a grandson of Garda Finn’s landlady.

Ms Farrell’s allegation that Garda Finn used to walk by her son and call him ‘a little bastard’ was ‘a complete fabrication’ and he had dealt professionally with Ms Farrell at all times. In earlier evidence, the court heard that a phone conversation suggested a ‘very close’ relationship between Jim Fitzgerald and Marie Farrell.

Tom Creed SC put that suggestion to Jim Fitzgerald after the jury heard a recording of his conversation with Marie Farrell from October 9th 1997.

During the conversation, and immediately after a redacted exchange between them, Ms Farrell said to Mr Fitzgerald: ‘You are a pervert.’ He replied: ‘I f***ing am not ... if I am, I’m talking to another one.’

Mr Fitzgerald said he was down in the Farrells’ house a number of times and had had two beers with her husband on December 23rd 1997, the first anniversary of the murder, when he gave her information about the source of threatening phone calls from a public phone box.

Ms Farrell had also told him on occasions of being assaulted by her husband, he said.

He denied he had introduced Ms Farrell to Fianna Fail Senator Peter Callanan as ‘part and parcel’ of Mr Fitzgerald’s ‘looking after’ Ms Farrell and her family. In her evidence to the jury, Ms Farrell alleged Mr Fitzgerald introduced her to the senator for the purpose of assisting her with housing issues.

He denied he suggested to Ms Farrell she should pick the name of a dead man when asked to identify her companion on the night of December 22/23rd 1996. That would contradict his own efforts to identify and locate that companion, he said.

He repeated his denial of Ms Farrell’s claim that he, on an unidentified date, stripped naked and asked her for sex in a holiday home.

Asked about another recorded phone call of April 20th 1998 with Ms Farrell, in which he expressed annoyance several times that she had made a statement to Sgt Maurice Walsh, he said he was very annoyed because she made that statement after he had reported to the incident room her previous insistence she would not be making any statements or going to court.

Their friendship came to an end after that call but there was contact in June 1998 afetr material came back from the DPP, he said.

Ms Farrell phoned his home and told his wife about being threatened by Mr Bailey so often his wife put a ‘do not answer’ on the calls, he said.

Mr Fitzgerald also said he became suspicious of Martin Graham about April 11th 1997 when, after a visit to Mr Bailey’s home, Mr Graham gave gardai a prescription sticker with Mr Bailey’s name on it and remarked gardai woud know what to do with that.

Mr Fitzgerald said she was suspicious Mr Graham might be taping the encounter and that Mr Bailey might be involved in a plan with Mr Graham to get gardai to plant evidence and then compromise them.

When counsel asked was he suggesting this ‘dope smoling tree hugger’ was sophisticated enough to go around taping gardai, Mr Fitzgerald said he did not know what had occurred when Mr Graham had visited Mr Bailey’s house.

Earlier, Mr Fitzgerald denied that remarks made by him during another recorded phone conversation with Garda Billy Byrne of Ballydehob garda station showed that he, Mr Fitzgerald, was ‘quite happy’ to predate statements. He agreed predating statements is ‘a corrupt practice’. He said he would not do it and was not suggesting it during that phone call.

The court heard that both gardai were discussing, in April 1997, the possibility of a complaint of assault against Marie Farrell’s husband by an alleged prowler at their home.

Asked about his referring to the alleged prowler as an ‘auld bollocks’, he said that was ‘a figure of speech in a phone call that was illegally taped’. The language was ‘inappropriate’ but he did not know calls were being taped and believed he could speak more freely, he told the court.

Asked did he not have a very personal relationship with Ms Farrell given he criticised her husband during a phone call with her in April 1997, he said he had a lot of contact with her then. He agreed one would have to be quite familiar with someone before you would criticise their spouse.

She was having difficulties with her husband, and had just been diagnosed with cancer on top on other problems she was experiencing, he said.

Mr Fitzgerald said a local man had told gardai Mr Bailey suggested to that man and his wife that they should contact the gardai to make a statement to see would they get some money. This was another effort to discredit gardai, and there had been similar efforts by witness Martin Graham, he said.

Asked what kind of relationship he had with Ms Farrell, he said it was a professional relationship, the ‘normal’ relationship between a garda and witness. He first met her on January 28th 1997, next met her on February 14th, and after that had several contacts with her about a range of matters, he said.

Asked what he meant when he had said to her during a recorded phone call of April 3rd 1997 he would have expected her to say: ‘Ah, Jim, I will see you any time, anywhere ...’, he said he was referring to a meeting scheduled for April 5th 1997 where another man, who was being inquired into as Ms Farrell’s possible companion on the night of December 22/23rd 1996, was travelling from Longford to meet gardai. Mr Fitzgerald said his recollection was he had not asked anyone to ‘take it easy’ concerning warrants issued for Ms Farrell concerning road traffic matters.

He recalled asking Garda Kevin Kelleher was Ms Farrell going to be lodged in Limerick Prison, as she had claimed to Fitzgerald in an earlier phone call. He said Garda Kelleher had said he was holdin)g off and giving her time to make payments.

Mr Creed said Garda Kelleher had made a statement to a garda inquiry that the warrants were not being executed due to Ms Farrell’s involvement in the investigation. The case continues next Tuesday.