Anita Douglas and her rescued horses 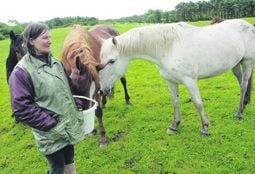 Anita Douglas and her rescued horses.

SKIBBEREEN Animal Rescue is on the move, and it’s looking for support.

Anita Douglas founded the Skibbereen Animal Rescue Centre to care for abandoned dogs, cats and ponies, at Skeagh, outside Skibbereen, 20 years ago.

However, because that farm is no longer available for use as a rescue centre, Anita confirmed that she will be relocating to a friend’s property on the outskirts of Ballydehob before the end of June.

Over the last two decades, Anita has saved the lives of hundreds of badly treated and neglected animals – all of which she has done on a voluntary basis.

‘People are very kind,’ said Anita, ‘without their support I would not have been able to meet the centre’s ever-increasing food and vet bills.’

‘Week-in week-out, people generously donate unwanted clothes and household items for sale in the shop and the proceeds have gone a long way to meeting the bills,’ said Anita.

But now the centre is facing a different kind of financial pressure. Anita said: ‘There will be a lot of additional costs involved in relocating the centre. For example, we now have to build kennels that comply with the standards set down by the Department of Agriculture.

‘This is going to be an expensive exercise. It will cost an estimated €20,000 to accommodate 45 dogs because the new pens will have to have proper drainage and a separate sewerage system.

Anita said the move to the two and a half acre site near Ballydehob would also necessitate the erection of a 7ft security fence around the perimeter to ensure that the dogs are kept on site. That alone could cost in the region of €6,000.

‘What we are looking for is voluntary help to clear the site; voluntary builders; the use of a small digger; donated fencing; and money – all donations, regardless of size, would be most welcome,’ she said.

Anyone who would like to support the project can call into the shop at North Street, Skibbereen, or send a cheque by post to the Skibbereen Animal Rescue at Skeagh, or use the centre’s Paypal account, which is [email protected]