DESPITE the go-ahead this week to re-open after six months, several West Cork pubs have decided that it might not be financially worth their while just yet.

For William O’Brien’s Corner Bar in Skibbereen, the reopening of rural pubs ‘could not have come at a worse time.’

William told The Southern Star he is taking a ‘wait and see’ approach and said that ‘a few smallish pubs are not opening and three in Skibbereen – the Paragon, the Fairfield and me – didn’t open on Monday.’ 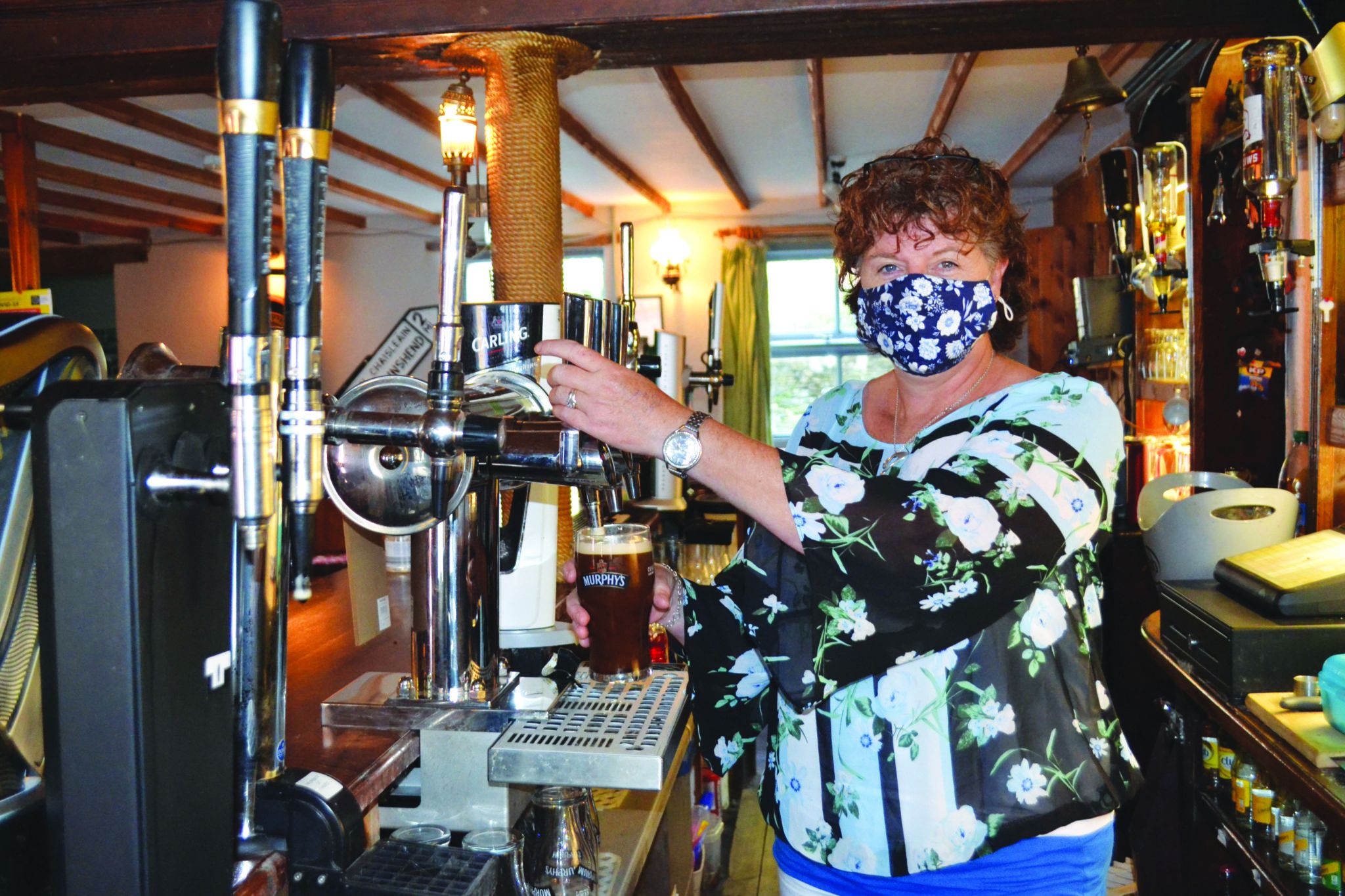 Tina Browne in Lill’s Bar, Castletownshend was back behind the counter on Monday.

He said there are others too – in Drimoleague and in Ballydehob – who don’t think it is practical to re-open.

‘I am going to give it a few weeks to see how the public responds,’ he said, ‘because when there is no counter, there is no atmosphere, or enjoyment. That’s what people come in for, the craic at the counter.’ 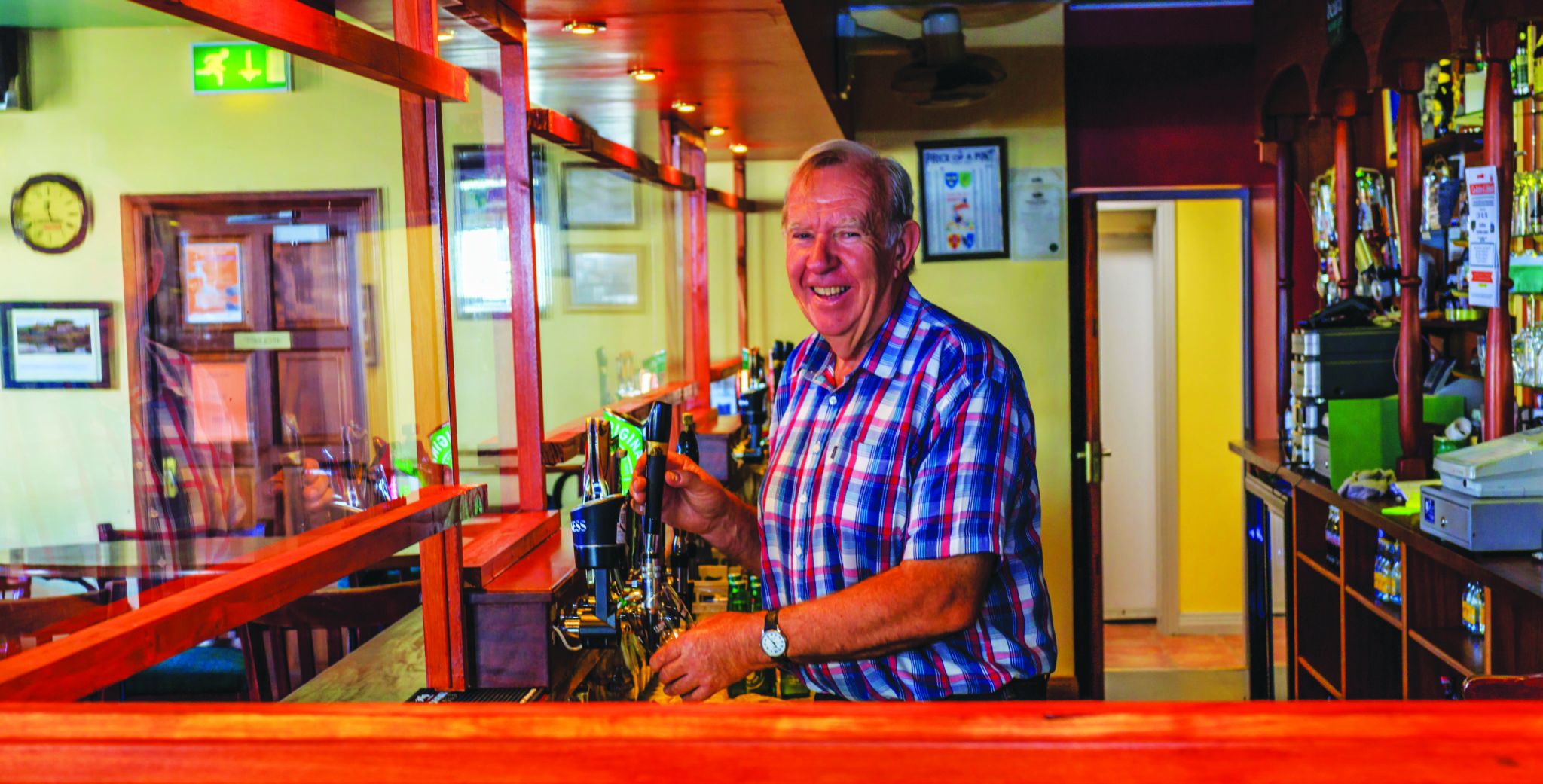 William believes: ‘There’s never been a worse time to re-open. They – the government – closed us down in March, when there were 20 cases a day, and they are re-opening pubs at a time when 250 Covid-19 cases a day are being reported.

‘We are also after missing the peak season,’ said the publican, who believes there is nothing for the trade but to ‘go through’ the bad patch.

‘Business will be down to half for most pubs. Financially, it’s not practical,’ he added.

But in the case of the Cosy Cabin in Bantry, the licensee, Terence Gibbs, had no choice in the matter because a major flood in the town, last August, left his pub in a shambles. 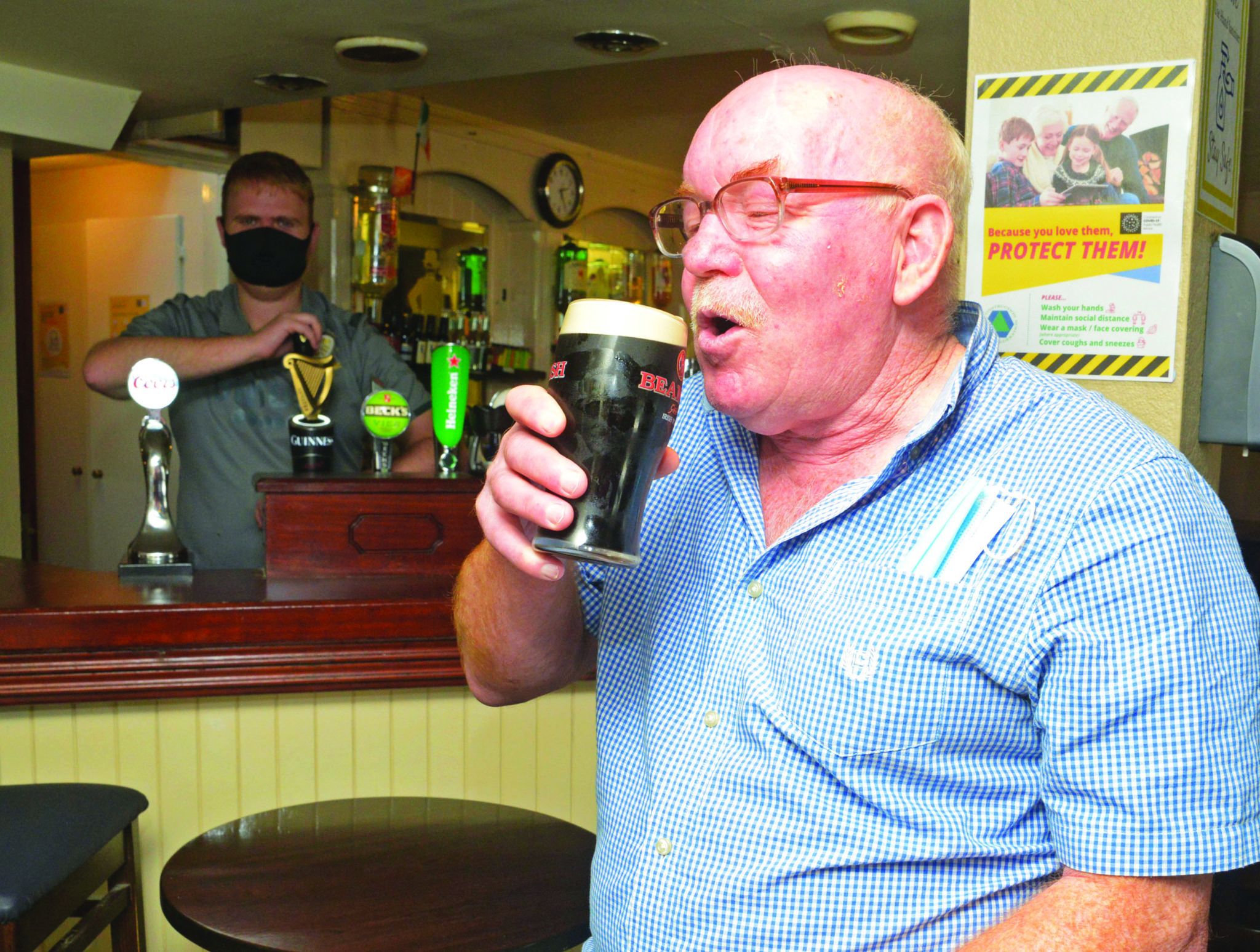 Terence estimated that it will be Christmas before he is likely to re-open, after the flood damaged everything from the wood to the wiring.

‘Even with all the help I got from the firemen, the Council workers, friends and neighbours, 100 people could not have kept the water out that night,’ he said.

Meanwhile, other local premises embraced the green light to open their doors.

The ‘craic’ was certainly back in Cookie O’Callaghan’s pub in Castletown on Monday night.

‘We had the victorious Enniskeane camogie team here following their County final victory on Sunday so it made it all the more special as I sponsor them and I wasn’t open on Sunday night,’ John O’Callaghan told The Southern Star.

In Coppeen, Therese Barrett, who runs An Caipín Bar said

people were happy to be back in the bar and getting back to normality. 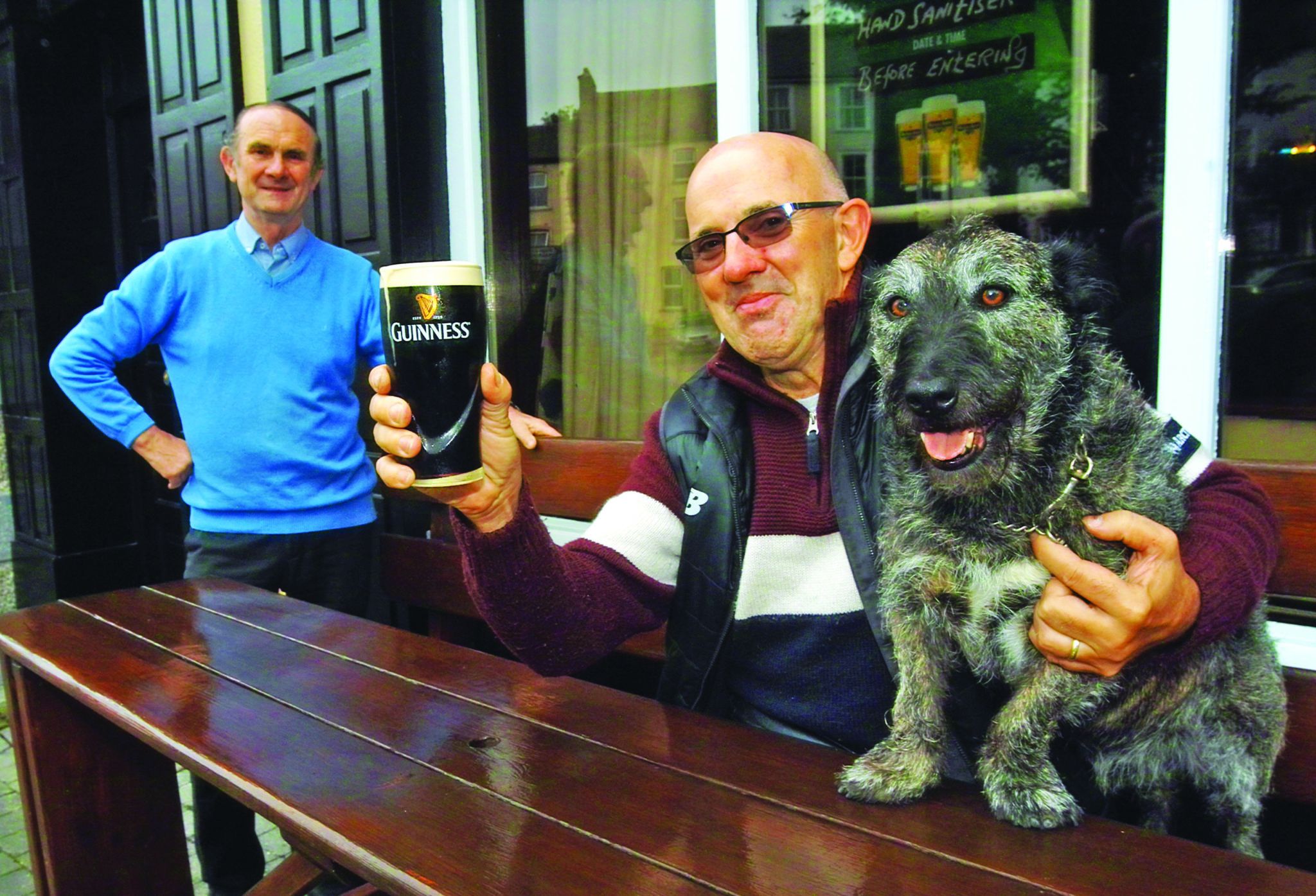 ‘People are already familiar with procedures in bars so it wasn’t an issue for them and they wait to be seated when they come in the door. There was a good atmosphere on Monday night and people came in their own groups and it all worked out great.’

Therese added that the most important thing now is that the pubs remain open.

In Kinsale, Mary Coughlan who has run The Armada Bar on Pearse Street for 35 years said: ‘We had an exceptionally busy day for our first day open.

‘We probably didn’t have enough staff on duty as it’s all table service now and that involves a little bit of extra legwork.’ 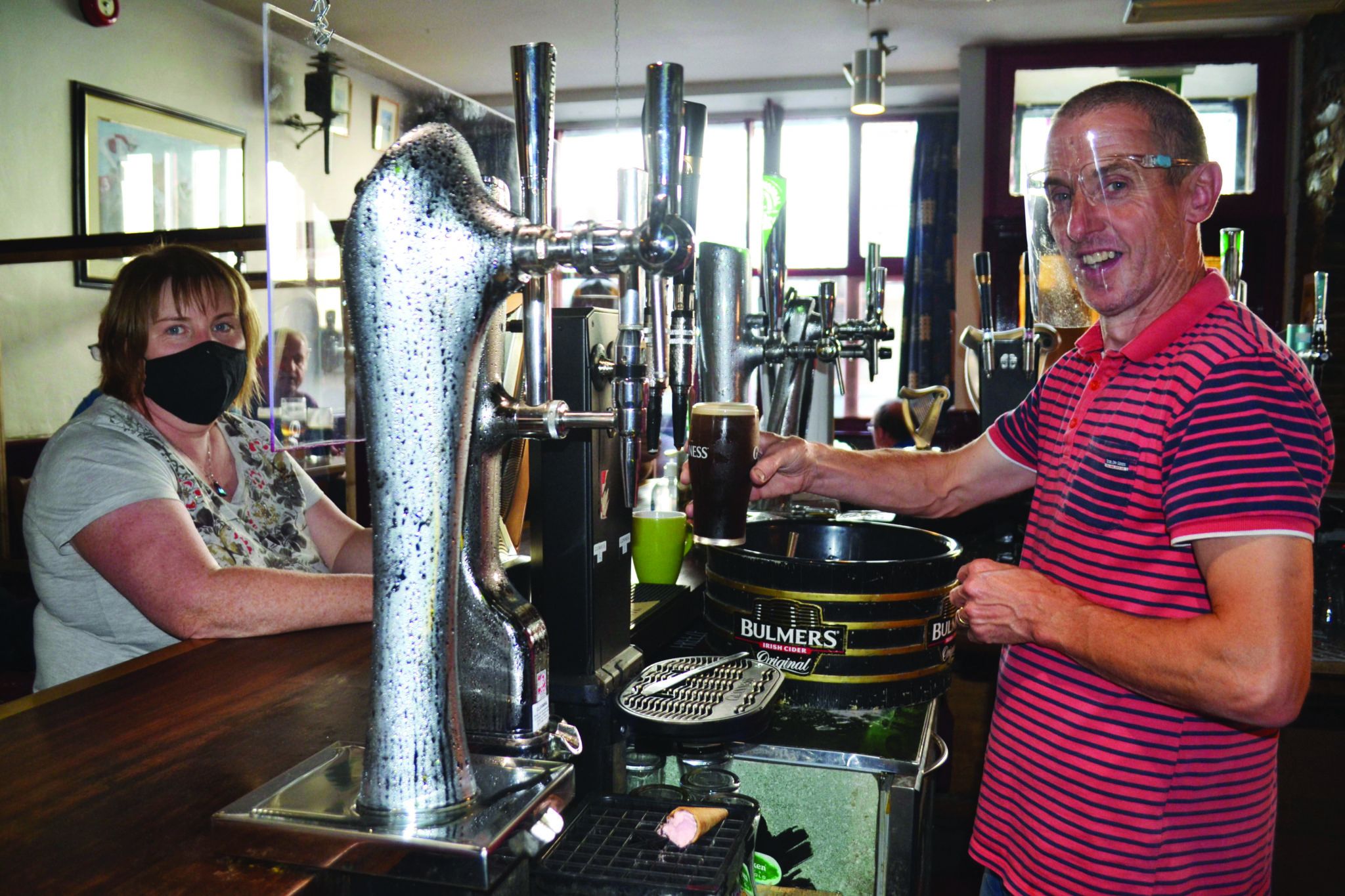 Ger Carey and Eleanor O’Sullivan back at work in the Horse & Hound in Skibbereen.

Meanwhile, chairman of the Cork branch of the VFI, Michael O’Donovan, who runs The Castle Inn in Cork city, said he was not aware of any pubs not re-opening so far, while some may delay opening for a week or two.

‘There was sense of relief for both bar owners and their customers that the bars finally opened after so many false starts. Customers are delighted to now be able to go out for a pint and not be watched to see if they had something to eat,’ said Michael.

‘While it’s under peculiar circumstances people are accepting it and embracing it.’