PROTESTORS were out on the streets of West Cork towns, including Clonakilty and Bandon, this Saturday afternoon as they carried on their campaign against water charges. 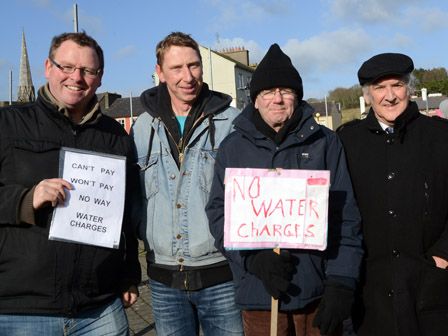 PROTESTORS were out on the streets of West Cork towns, including Clonakilty and Bandon, this afternoon as they carried on their campaign against water charges. It was mainly dry, but a northerly wind chill factor brought the temperatures down to low single figures

Since the last big protests in November, the Water Services Bill has been signed into law, however that has not deterred those resolutely opposed to water charges from continuing with their campaign and there were bigger rallies in the main cities.

Unlike some other protests of recent weeks, the West Cork marches were peaceful and dignified, albeit tinged with anger over the imposition of water charges.

In Clonakilty, around 100 people assembled at Emmet Square where they were addressed Clonakilty SF county councillor Cllr Paul Hayes; Ed Harper, People Before Profit Alliance.; Shannonvale resident Mark Stewart (non-politically alligned), who has been blocking Irish Water from installing a meter at his house for the last few days, and Bandon-based Sinn Féin county councillor Rachel McCarthy. After the speeches, the group marched down Kent Street, Rossa Street, into Pearse Street, over Edward Twomey Street and finishing at the Kennedy Gardens Park in Emmet Square, by which time the crowd had swelled to around 150.