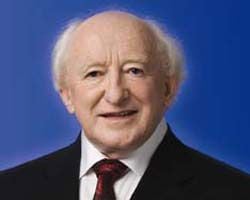 UACHTARÁN na hÉireann, Micheál D Ó hUigínn, has accepted an invitation from the bórd bainistíochta of Gaelscoil Mhichíl Uí Choileáin, Clonakilty, to visit the school on June 11th next as part of the 20th anniversary celebrations taking place at the school since September 2014.

The Gaelscoil first opened on September 1st, 1994, and since the beginning of the current academic year, a series of activities has been organised within the school to celebrate the first 20 years of Gaelscolaíocht in Clonakilty.

The high point of the celebration will be on June 11th when a piece of specially-commissioned art will be unveiled by President Higgins as part of his visit.

The bórd bainistíochta called for proposals under the Department of Education-sponsored ‘Per Cent for Art Scheme’ to fill a brief they had drawn up.

Fifteen artists applied and local artist Édaín Ní Dhomhnaill was commissioned. Her work has included a series of interactive workshops covering areas such as music, drama, creative writing, art, music, drawing, construction, physics and ornithology culminating in the creation of a two-part sculpture to be unveiled by the President during his visit.

An bórd bainistíochta, Cáirde na Scoile, páistí and foireann na scoile are busily making preparations to welcome the President for what should be one of the proudest days in the Gaelscoil’s history.

President Higgins will also be visiting Skibbereen on June 11th to officially open the new Uillinn West Cork Arts Centre building and to launch the commemorations to mark the centenary of the death of Jeremiah O’Donovan Rossa.