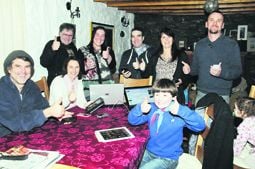 Neighbours in the Coomhola area of Bantry who came together last year to thank local provider Digital Forge for giving them access to broadband. But many people in remote areas of West Cork are still without a connection, says a prominent Cork businessman. (Photo:T ony McElhinney)

A CORK businessman has said Cork will be left behind if it doesn’t get total coverage for high speed broadband by 2020. And he has called on every TD in the county to get behind his campaign.

David Ronayne of Irish Mainport Holdings, who is also the regional president of IBEC in Cork, says a number of businesses have already relocated because of the poor coverage in Cork, but many IBEC members do not have that option. He has called on the Government to deliver high speed broadband to all parts of Co Cork by 2020.

The issue is of particular interest to many broadband users in West Cork who, for many years, have experienced poor, or non-existent, broadband.

The people of Coomhola near Bantry came together last year to fight for a broadband connection in their area.

Schull-based Digital Forge eventually came to the rescue, after Ger O’Sullivan of the West Cork Offline group organised a public meeting in Ballylickey for the 380 households in both Borlin and Coomhola to voice their frustrations.

In the past, many people were resorting to working in the middle of the night, when the service slightly improved, or heading into internet cafés in Bantry, he had explained.

This week the issue was back on the agenda when Mr Ronayne pointed out that, despite significant investment by the private sector, 32% of commercial and residential premises in Cork do not currently have access to high speed broadband.

‘This has huge repercussions for the region in terms of job creation, social inclusion and competitiveness,’ he said.

‘Small and medium sized firms without high speed broadband are unable to compete on a level playing field for the estimated €5.9bn spent online annually by Irish consumers,’ he said. He claimed that this had forced some SMEs to relocate but that wasn’t an option for many IBEC members, particularly those in the hospitality sector. ‘It also impacts on the thousands of people who work from home or who need high speed broadband in their homes to connect with colleagues overseas in different time zones and out of hours,’ he said. ‘The reality,’ he continued, ‘is that without high speed broadband, significant parts of the county simply cannot compete effectively. That is why it is imperative that the Government commits sufficient funding to deliver high speed broadband in our region by 2020, wherever it is uneconomic for the private sector to do so. We are writing to every TD in the county to highlight this issue and to ask for their support,’ he said.