June Wood, representing category sponsor IFAC, with Finbarr Hurley from Kilbrittain, who is this year’s Hall of Fame award winner.

Tom Curran of Teagasc Cork South West with Denise Twomey, winner of the Young Farmer Award. Teagasc provided a prize of a free technology advisory contract for 12 months for the winner of this category

They took place in the Celtic Ross Hotel, Rosscarbery last Friday, and while it was a socially distanced event in line with public health requirements, there was still a strong sense of occasion, not to mention a huge feel good factor and camaraderie, as the six winners were recognised among their peers.

This year’s awards process commenced back in May when The Southern Star invited entries and nominations across our six categories: Young Farmer, Dairy Farmer, Drystock Farmer, Diversification, Hall of Fame, and Outstanding Contribution to West Cork Farming.

There was a healthy response and the judging panel, chaired by Southern Star MD Séan Mahon, who, along with John Buckley, Caroline Murphy, JJ Walsh, and Tom Curran agreed it was an encouraging reflection of the calibre of farmers in West Cork.

Our plans to hold a gala awards lunch in late November were dashed due to the rise in Covid numbers. However, Séan Mahon said: ‘We felt it was still very important to make sure we had an opportunity to celebrate and honour our winners and be able to present them with their trophies and certificates.’

Thanks was also extended to new sponsor and partner Carbery for their support of the awards including CEO Jason Hawkins, Enda Buckley, Louise Kelly and Aoife Feeney. Teagasc Cork West were thanked for sponsoring a free technology advisory contract for 12 months for young farmer winner, Denise Twomey.

This will include technical farm visits, unlimited phone and office consultations for technical advice and scheme support. The event was held in association with Five Farms Irish Cream Liqueur, which along with Irish whiskey, contains cream from five family-run dairy farms in Cork.

Founded by Johnny Harte, guests got to sample the drink at the event, and were treated to samples in their goody back which also contained Carbery cheeses and confectionary from Bandon based Coolmore Foods.

Attendees were also gifted a supper box courtesy of The Celtic Ross which contained local cheeses and cold meats, as well as the hotel’s in-house bread, desserts and salads.

DAIRY FARMER OF THE YEAR 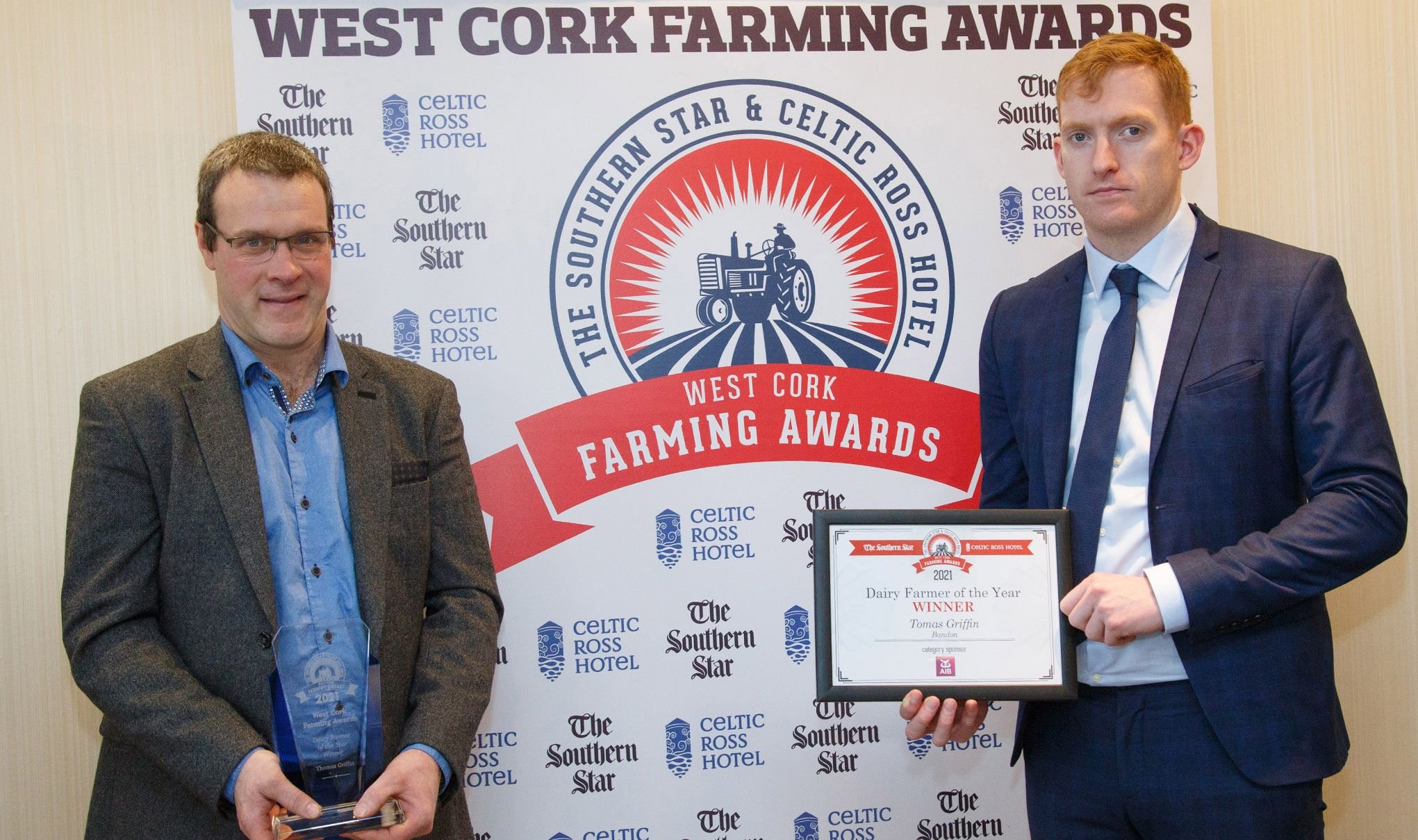 DRYSTOCK FARMER OF THE YEAR 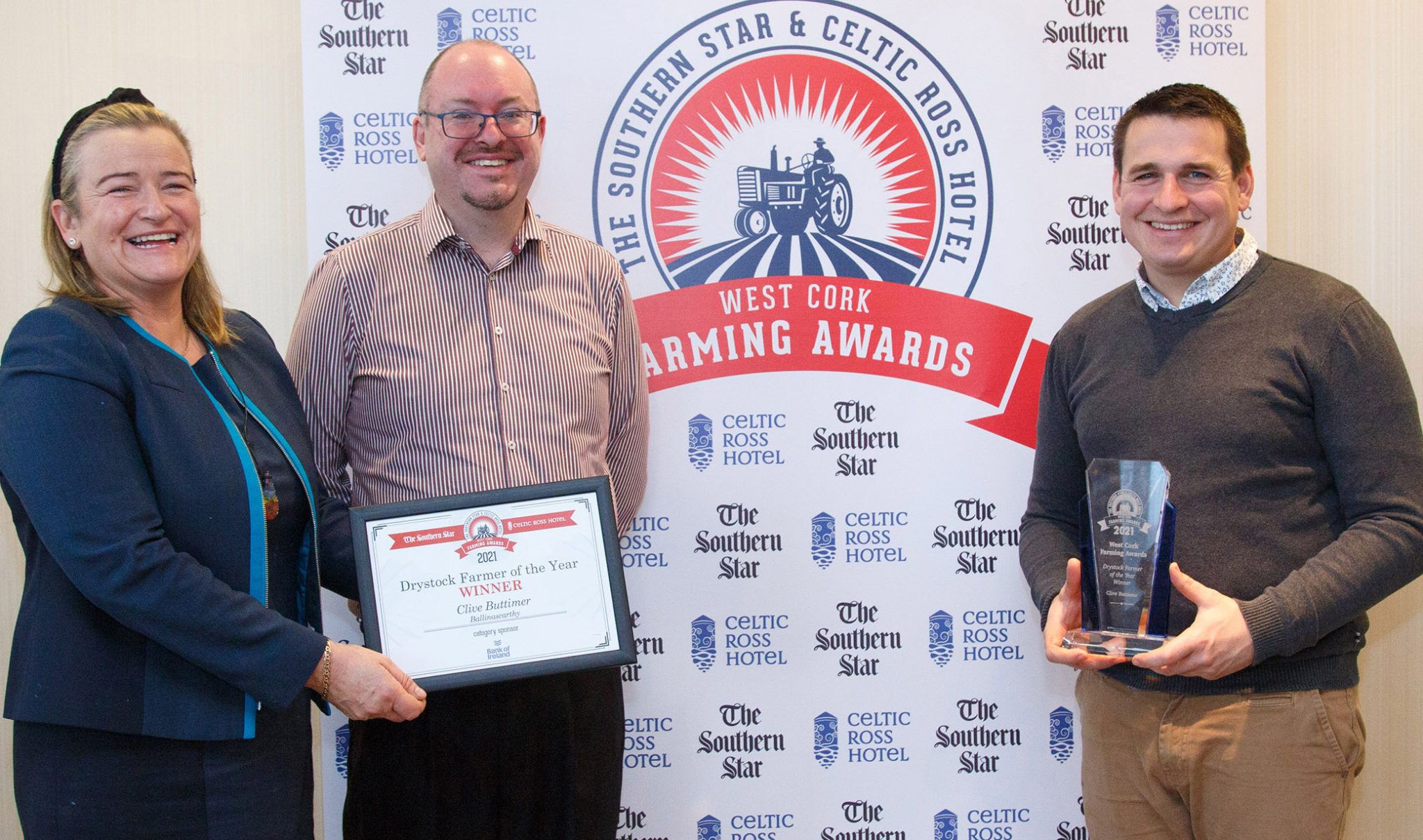 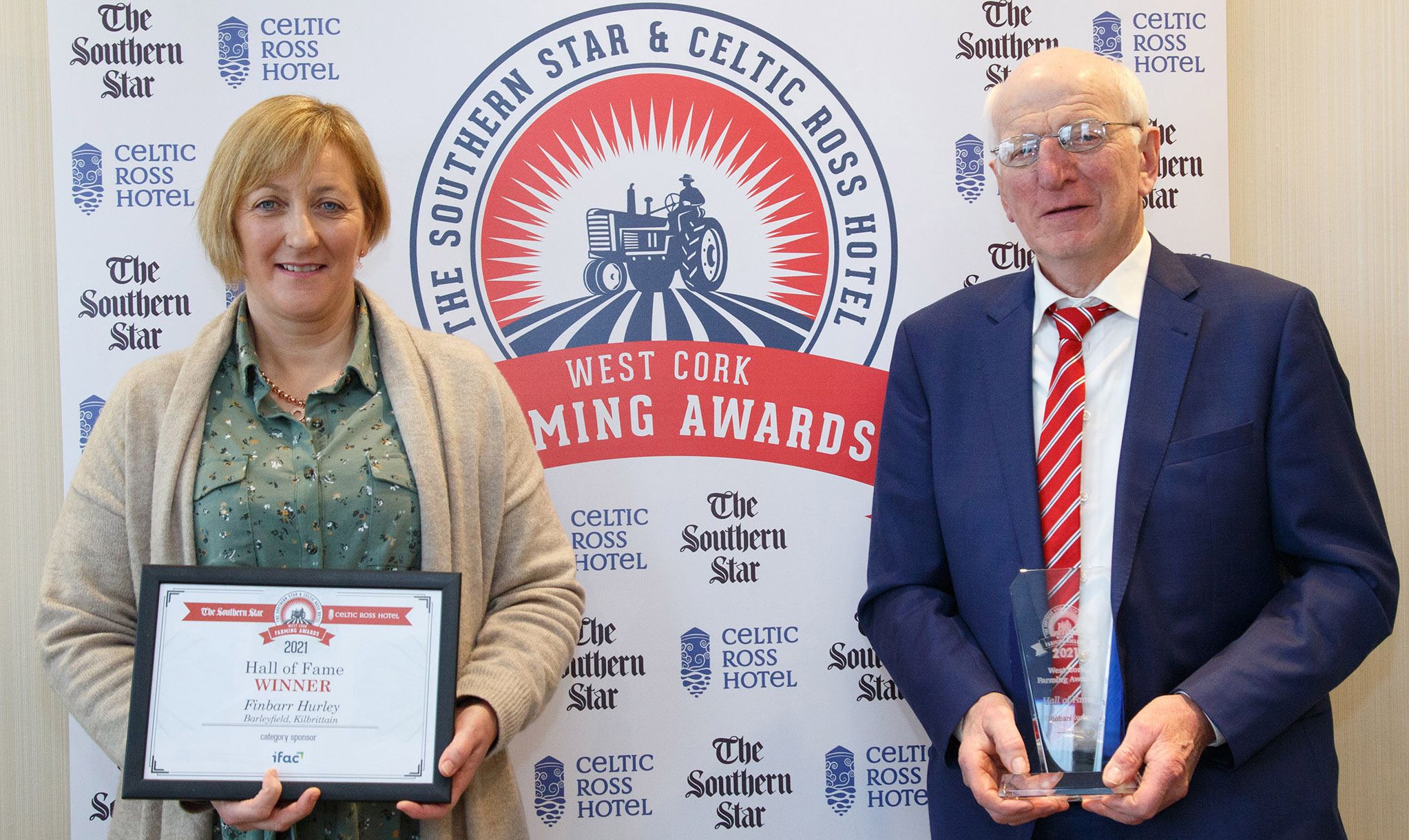 June Wood, representing category sponsor IFAC, with Finbarr Hurley from Kilbrittain, who is this year’s Hall of Fame award winner. 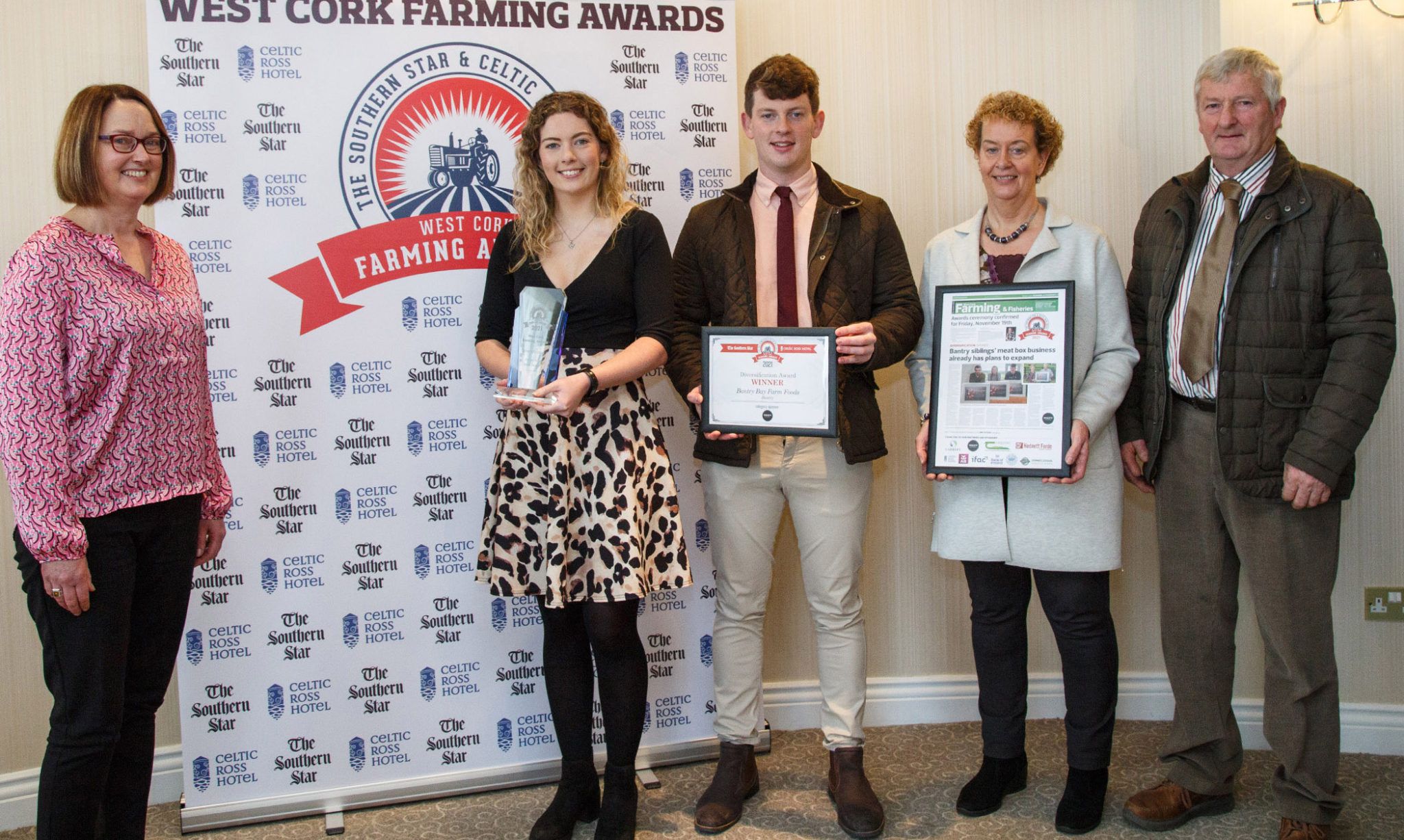 YOUNG FARMER OF THE YEAR 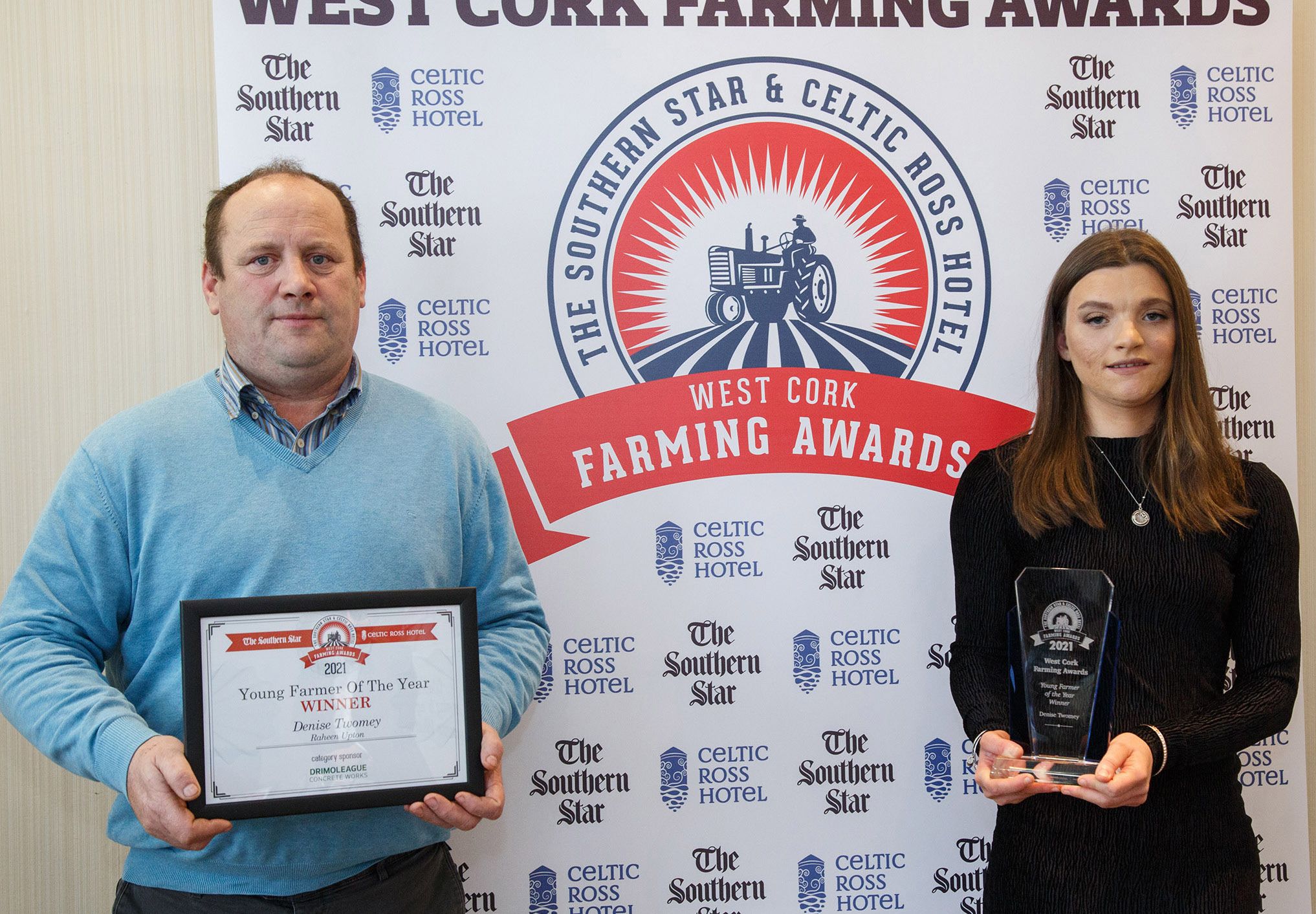 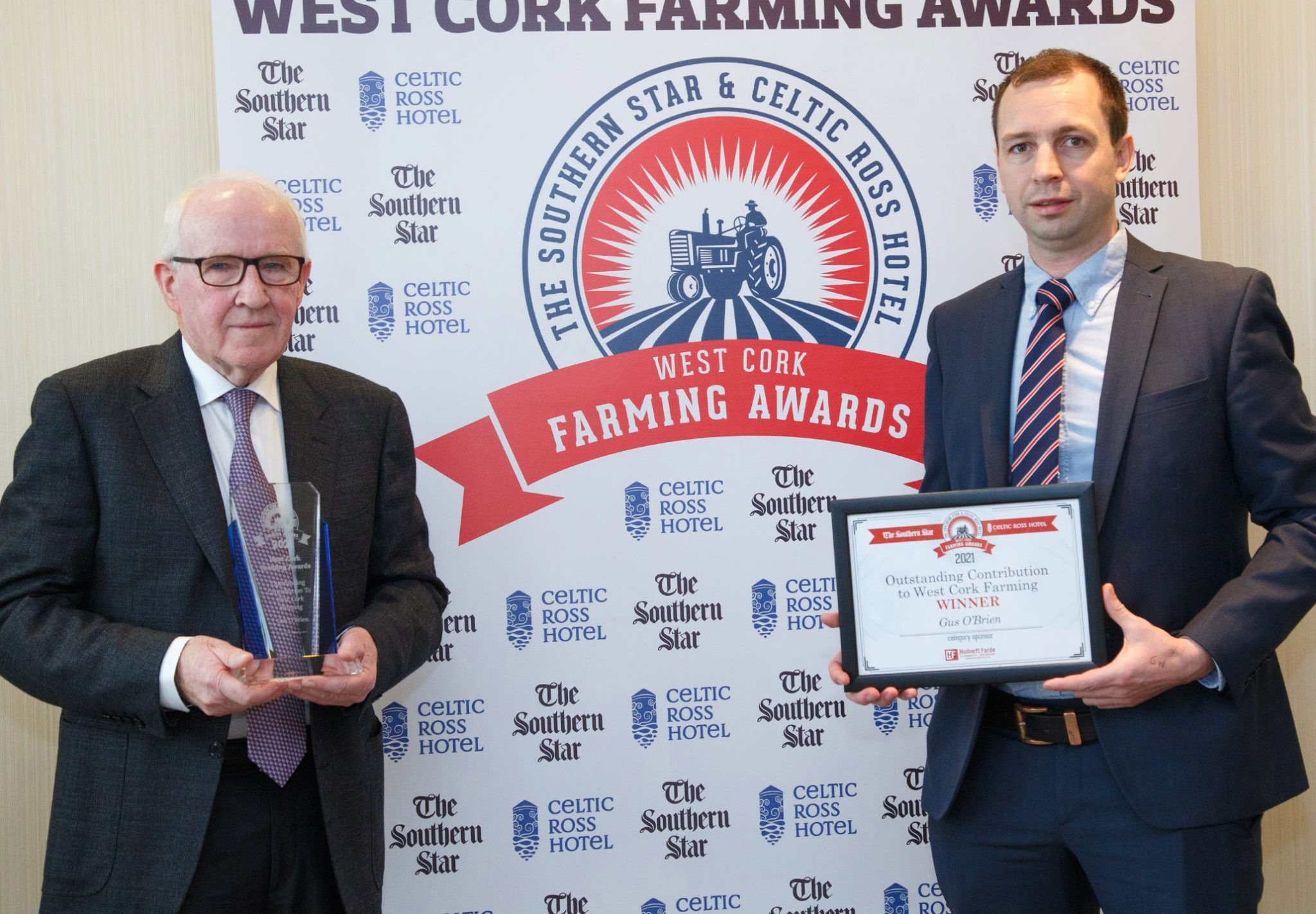 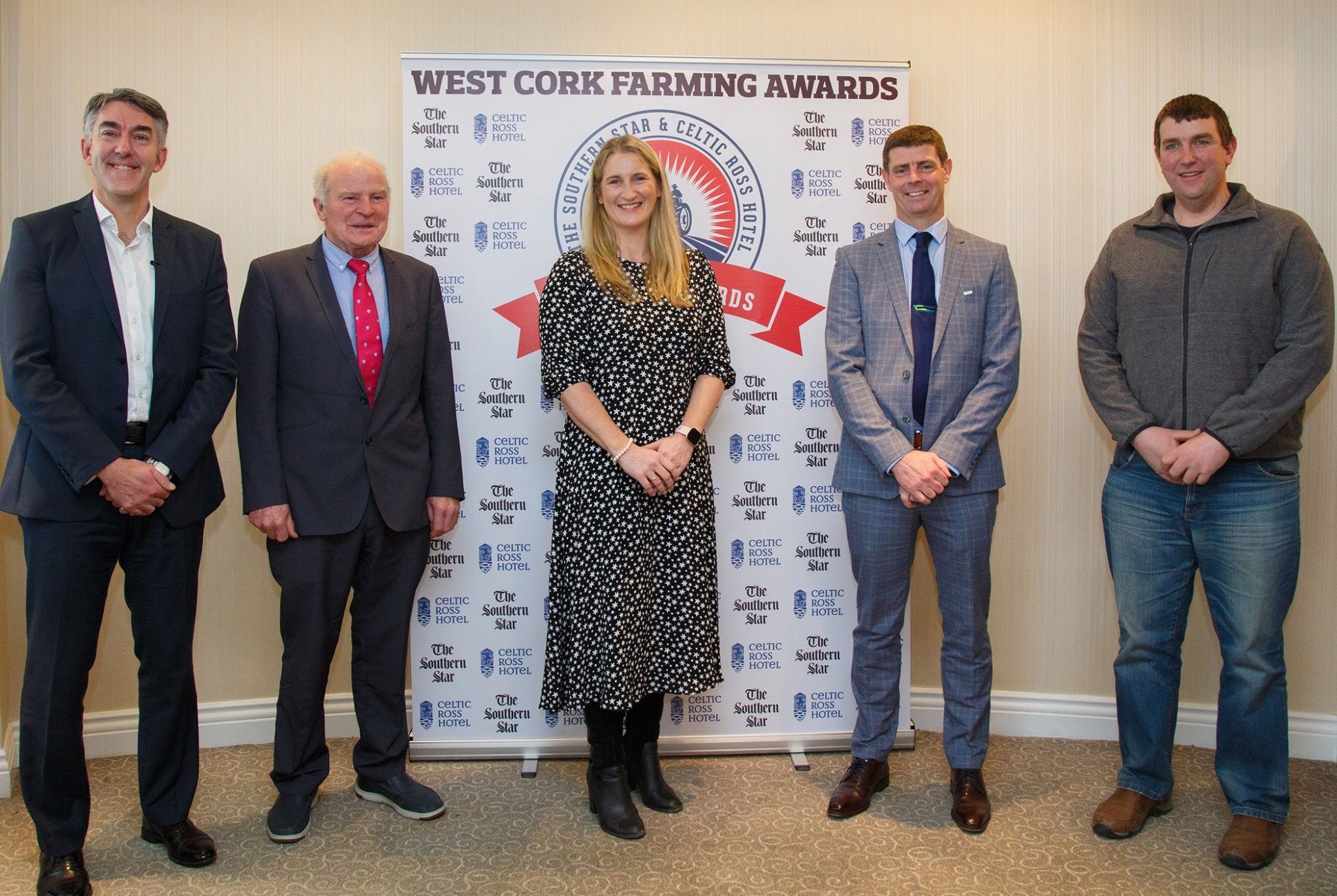 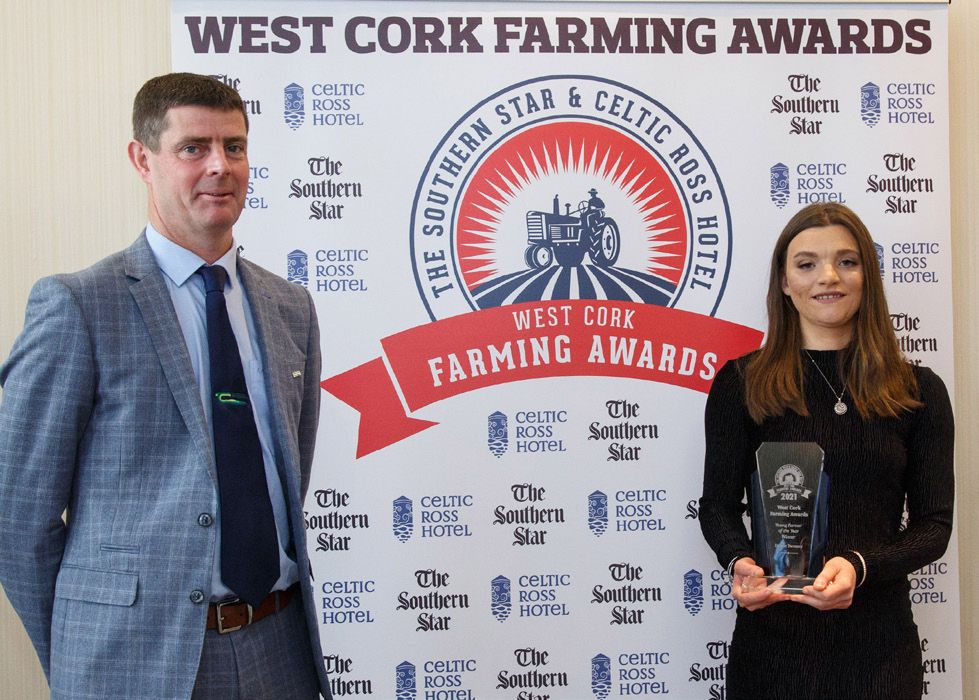 Tom Curran of Teagasc Cork South West with Denise Twomey, winner of the Young Farmer Award. Teagasc provided a prize of a free technology advisory contract for 12 months for the winner of this category