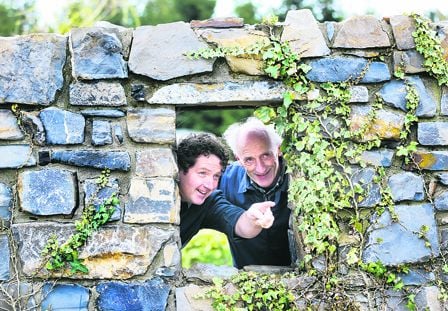 A MATURE student from Leap has been named as the winner of the prestigious 2015 Kilsaran Student Garden Competition.

Pat O’Mahoney travelled to the Kilsaran headquarters in Dunboyne, Co Meath to collect his prize, a bursary of €3,000, which was presented by Ireland’s most famous garden designer, Diarmuid Gavin.

The 61-year old winner, who is from Keamore in Leap, is an architecture student at University College Cork, and his award-winning design was submitted as part of a nationwide competition.

The competition, which attracted in the region of 100 quality entries, rewards students of horticulture, garden design and landscape architecture.

Pat said: ‘I saw the competition on a notice board in UCC and thought I’d give it a go because I have had a lifelong interest in gardening.’

As part of his prize, Pat will have his garden built and put on display for customers at the Kilsaran’s show gardens in Dunboyne.

Pat’s garden has conversation as its theme and is inspired by woodland clearings.

‘It just shows you,’ said Pat, ‘no matter what age you are, it is never too late to pursue a new career. I have just one year left to finish my architecture degree and this award has given me the boost I need to follow this new direction in my life.’ Pat previously worked as a head gardener at Liss Ard Estate in Skibbereen.