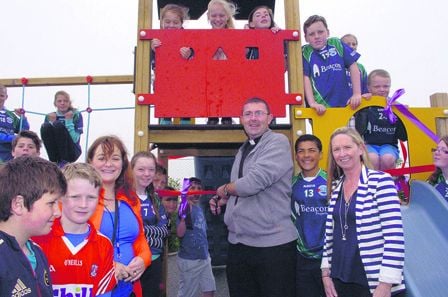 SOME primary school students may be dreading returning to school on Monday, August 31st next, but not the 98 pupils attending Rath National School.

It might have something to do with the fact that the finishing touches to a colourful new playground has been finalised in recent weeks.

The principal of Rath National School, Máire Collins said the playground, which was paid for by the parent’s association, is ‘fantastic.’

She told The Southern Star ‘It is great for the kids in terms of outdoor exercise and interaction and, in that respect, I believe it is money very well spent.’

The principal thanked ‘the very supportive parent’s association and the Board of Management for organising every aspect of this recently completed amenity at the school.

The very active parent’s association has also provided interactive whiteboards, ten iPads, two laptops, an outdoor shelter, as well as paying for the construction of the school’s very own vegetable and sensory garden.

‘We all work very well together,’ said the principal of the six-teacher school. And she thanked them for providing a playground – the like of which would be the envy of other schools.

The playground project was actually started in January 2015, but the finishing touches were put in place over the summer months and now it has everything you’d expect to find in a town or city park.