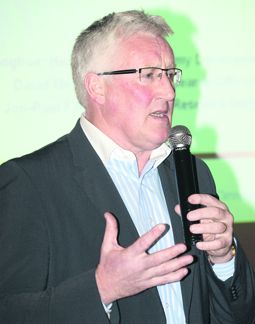 AN expert advisory group is being established to assist the development of rural development policy and implementation of the government’s CEDRA report.

Minster for the Environment Alan Kelly and Minister of State for Rural Affairs Ann Phelan this week announced its establishment almost a year after the report was launched last Easter. The group, which will be chaired by Pat Spillane, contains a number of prominent business leaders, academics and a former county manager. Included in the group are Pat McDonagh, MD of Supermacs; Dr.Edmund Harty, MD of Dairymaster; Chris Martin, CEO of Musgraves, as well as journalist Helen Carroll.

They will form an expert Advisory Group to support the implementation of the recommendations of the report of the Commission for the Economic Development of Rural Areas (CEDRA). This group will be chaired by Kenmare’s Pat Spillane, who was also the chair of the original commission that completed their work in 2013.

CEDRA was established in 2012 to examine the potential for economic development in rural Ireland out to 2025. The report contains 34 recommendations, the implementation of which the expert group is appointed to assist. Minister Kelly said: ‘I am delighted that people of this calibre are willing to assist in the economic development of rural Ireland.

The people on this group will represent the reality of the rural economy in Ireland and give the Interdepartmental Group (IDG) an “on the ground” perspective when establishing systems and frameworks to support rural development.

‘In this context I am also delighted to welcome back Mr Pat Spillane, who will chair this group and whose energy and determination were critical in the excellent work of CEDRA reflected in its recommendations. I am very much looking forward to working with the group to ensure that the work of the IDG is grounded in the reality of rural life in Ireland and can facilitate initiatives that support the sustainable development of rural communities all over the country. We have to develop rural Ireland as a place of business if we are to see the recovery spread to our towns and villages.’

Minister Phelan added: ‘I am looking forward to working with the Advisory Group to progress the implementation of the CEDRA recommendations. I am particularly pleased that the members of this group are grounded in rural Ireland from a variety of perspectives and am confident that they will be able to provide support and advice that will be relevant, practical and useful.”

Pat Spillane said, “I am looking forward to the work of driving the rural agenda and using the Government and local authorities to drive this forward. Rural Ireland is simply not maximising its economic potential and we need to deliver actions that assist rural development across the country,’ she added.

The CEDRA report was completed in December 2012 published in November 2013 and was launched by the Taoiseach in April 2014. In July 2014 Minister Ann Phelan was appointed as the Minister for Rural Affairs with special responsibility for rural economic development and the implementation of the CEDRA recommendations.

Since her appointment Minister Phelan has established an Interdepartmental Group (IDG) to support the coordinated delivery of the recommendations contained in the CEDRA report. The group is chaired by the Minister and consists of senior officials from Government Departments, whose policy areas have a significant direct or indirect impact on the economic development of rural Ireland.

In order to maintain strong links with people in rural Ireland who are directly involved in or have a strong interest in the economic development of rural areas, Ministers Kelly and Phelan have decided to establish this Expert Advisory Group to monitor progress and provide advice in respect of the implementation of the recommendations in the CEDRA report.

The Advisory Group will consist of the Chair Mr Pat Spillane, up to 10 Ordinary Members and one senior official from the Department of Environment, Community and Local Government (DECLG). Full membership of the group will be announced once finalised.