At Deasy’s Car Park, Clonakilty as the finishing touches were being applied to a mural depicting the integration of youth and the connectivity with nature, music and sport were (from left): Sheila Kelleher, artist facilitator; Kitty Sisson and Kathryn Kingston, both Clonakilty Friends of Asylum Seekers. (Photo: Martin Walsh)

An integration project in Clonakilty has provided an opportunity for young people from all across the community to come together and create a lasting piece of art in the town. Emma Connolly reports

AN exciting project to bring together young people from different parts of Clonakilty’s diverse community has just been completed in Deasy’s Yard carpark.

Creative teenagers from Clonakilty Lodge Direct Provision Centre and The Shack Clonakilty, YMCA’s UBU Youth Space in Clonakilty, joined up to design, implement, and paint a vibrant mural on the wall at the back of the yard.

The timing of the project couldn’t be better as work is getting underway on the town’s long-awaited youth centre in the same space.

The project began in August 2020 when funding was secured through Cork County Council Arts Scheme by Clonakilty Friends of Asylum Seekers (CFOAS), but was unfortunately delayed due to Covid-19 restrictions. While the young contributors were able to meet once with Sheila Kelleher, artist, and group facilitator, to discuss their ideas, plans for painting the mural had to be postponed until restrictions eased.

Following the reopening of schools in April 2021, the organisers came together to ensure that the mural came to fruition as quickly as possible. The key community-based organisations worked in partnership:  Kathryn Kingston of CFOAS and West Cork Development Partnership liaised tirelessly with Cork County Council, while Courtney Canning, YMCA, development officer for West Cork and Kitty Sisson, service co-ordinator with CFOAS, regrouped the teenagers and sourced some additional volunteers.

Sheila Kelleher, with some assistance from husband Martin and son Coillte, gridded up the wall and outlined the first of the images including a group photo, taken by Lauren Bateman in 2020 and adapted for use on the mural, in preparation for the return of the young people.

As Sheila explained, the idea of ‘youth’ is represented on the mural by the central panel featuring six teenagers, and the images for this young multicultural group are representative of the young people who worked on the mural.  The trees, depicted on the four outer panels, represent themes of nature, climate and our natural world, and came about following the initial discussions when the group asked for trees to be included as they are ‘intrinsic to every living thing’.  The abstracted leaves represent the circle of life which flows from the trees and surrounds the group.

‘The young people were very aware and focused on climate change and the importance of nature’s connectivity with every living thing,’ said Sheila.

Other images requested by the group depict instruments, which are used to symbolise the importance of music, while a rugby ball, hurley and skateboard are used to demonstrate the role of sport in young lives.

Finally, the blue ribbon, which winds through all five wall panels in the mural, reminds us that both in Clonakilty and the rest of Ireland we are surrounded by water. Inscribed on the ribbon is an old Irish proverb: ‘Ar Scáth a chéile a mhairimid’ which translates as ‘Under each other’s shelter we thrive (or) live’.

This wonderful proverb represents the wisdom of our past which is still so relevant today: to protect and shelter one another, and is an apt sentiment for this very inclusive project, especially as the word ‘shelter’ has been translated into several languages. 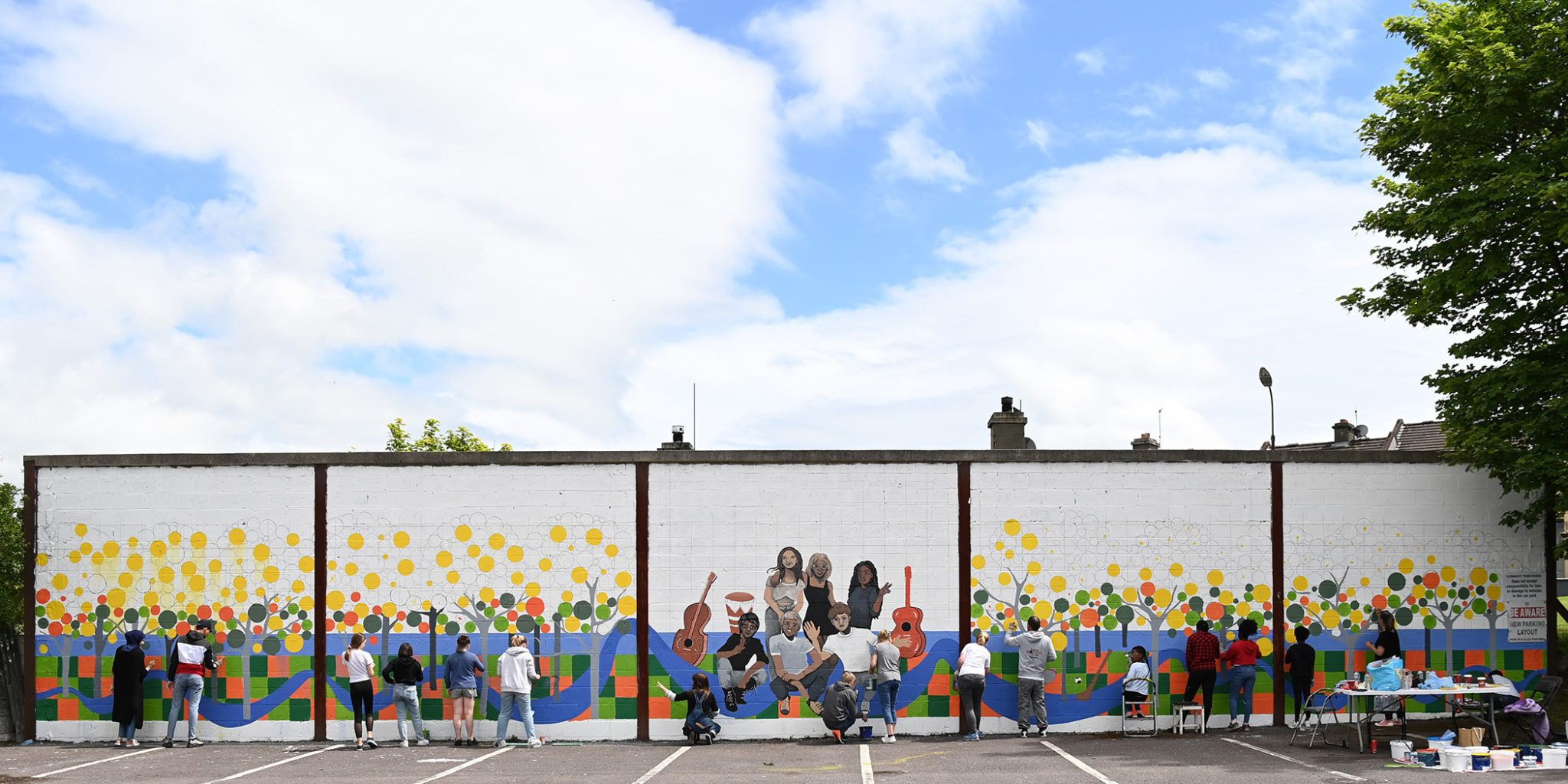 Over the course of the 10 days of painting and as the mural developed, images of interest to the young people involved were added. There was also much interest from passers-by and requests came flooding in to paint other walls around the town!  The youngest painters were Kinna, aged two, who came along with mom Lora and Annelise, aged just 4 months, who came along with mom Millica.

The project has been documented by Lauren Batemen, film studies and production student in Queen’s University Belfast.

Along with assisting with the painting, Lauren took photos and short video clips throughout the week and will compile a five-minute video clip for submission to Cork County Council as part of the required report.

Safety officer on the job was Mark Gaffney of West Cork Development Partnership.

The ravenous painters were fed and watered by Courtney, by generous passers-by, WCDP, Lauren’s mom Deborah and thanks to Barry in Harte’s Spar. The mural has created a wonderful sense of achievement and is a great example of the community in Clonakilty working together.

Courtney commented: ‘It provided a space for 10 days to allow young participants express their creative talents. It promoted pro-social behaviour and created a sense of connection between the town and the young people that inhabit it.

‘The arts provide a perfect environment to develop soft skills such as confidence, creativity, and teamwork.  Most importantly, young people had fun and it was a fantastic project for social inclusion’.

Kitty Sisson echoed Courtney’s thoughts and added that ‘this is another excellent example of a successful integration project in Clonakilty, and has provided an opportunity for young people from across the community to come together and create a lasting piece of art in the town. It is also testament to the progressive and forward-thinking ethos of all the community groups involved as well as being something that the young people who contributed should be very proud of’.

CFOAS would like to thank Cork County Council and all those who have worked so hard over the last year to bring this project to completion.