Erin Laughton: his mum has launched a web campaign to help him

BY JACKIE KEOGH A WEST CORK mum has resorted to a crowd funding website to try and get medical help for her autistic son. 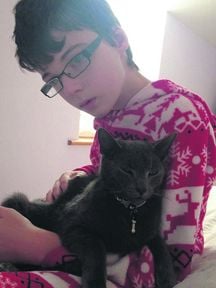 Erin Laughton: his mum has launched a campaign on a fundraising site to help him

A WEST CORK mum has resorted to a crowd funding website to try and get medical help for her autistic son.

Karen Laughton has created a page on fundraising site gofundme.com, seeking financial help for her 12 year-old son Erin, who has been waiting for over two years for an MRI scan in Dublin.

She says he has deteriorated hugely in recent years, and has been denied tuition from the Department of Education.

Karen, who is from Skibbereen but is now living in Baltimore, explained how her son has a speech and language impairment that means, not only does he have severe problems understanding language, but he also struggles significantly expressing himself.

‘Erin,’ she said, ‘has no friends.’ He finds social interaction difficult and any unfamiliar person, or place, can cause extreme anxiety. This is the reason he has not been in school since last May.

He has been denied home tuition from Department of Education and spends all of his days at home. Erin also has epilepsy and suffers from seizures. Erin was also diagnosed with are a rare chromosome disorder called XYY syndrome. Referring to long HSE waiting lists, Karen said: ‘We are still waiting to see a geneticist. I have had to learn about the condition online.’

A neurologist referred Erin for an ‘urgent’ MRI two years ago in Dublin. ‘We are,’ Karen said, ‘still waiting.’ In the meantime, the situation has become even more urgent because Erin is now experiencing pain in his bones.

During the summer, Karen demanded new assessments in physiotherapy and occupational therapy, due to his regression, and she said: ‘The results were shocking.’

Erin’s condition has significantly deteriorated. His scores are now in the profound area. Erin cannot dress or shower himself and due to his hyper mobile joints and poor muscle tone, he can barely write.

Erin now walks slightly bent over because his body tone is so weak he cannot hold his body upright and without intensive intervention, this will continue to get worse.

He tires easily and when he can, he walks on his knees, as he finds it easier than walking. wwww

What makes these problems even more serious, is that Erin is underweight: no matter how much he eats, he doesn’t seem to gain weight and due to his chromosome disorder Karen said Erin is expected to grow to a minimum of 6’ 8”. At the age of 12, he is already 6ft.

After fighting continuously, Karen confirmed: ‘We have been allocated six sessions of intensive therapy for the year.’ But the future for Erin is looking bleaker and bleaker, and hopes of Erin ever becoming independent are diminishing at an alarming rate unless intensive therapy, medical intervention and appropriate education can be given.

This week Karen set up the funding campaign, at http://www.gofundme.com/l9j81g to see if she can fund private help for Erin.

‘It is because I have become desperate that I put it up on Facebook. I did it in five minutes flat,’ she told The Southern Star. ‘It is heartbreaking for me to just sit back and watch him every day. I must do something.’