AN 'iconic' phone booth in West Cork has been granted a reprieve by Eircom. 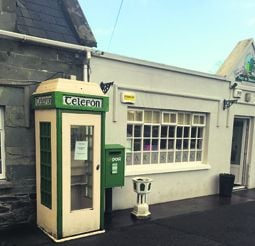 AN ‘iconic’ phone booth in West Cork has been granted a reprieve by Eircom.

Following local representations, Eircom has decided to put a stay on the removal of the traditional pay phone from the award-winning village of Rathbarry.

The local community responded swiftly and decisively when Eircom placed a notice on the phone box advising them that it was to be removed on Thursday March 12th as part of a company ‘review of services.’

Residents in the award-winning village began their campaign by contacting their local TD, Jim Daly (FG).

They made the point that with no mobile phone coverage in the area, the public pay phone was a vital local service – a point he happily took up with the company.

Mr Daly said: ‘I was happy to be able to notify the residents that Eircom has reversed its decision.’ The TD also acknowledged the work done by the community, not just in terms of maintaining the phone booth, but preserving it too.

‘The phone is an essential service in the area,’ said Mr Daly, ‘but, over the years, it has also become a popular place for people to take wedding and holiday snaps. It has become part and parcel of the village now. It’s iconic.’