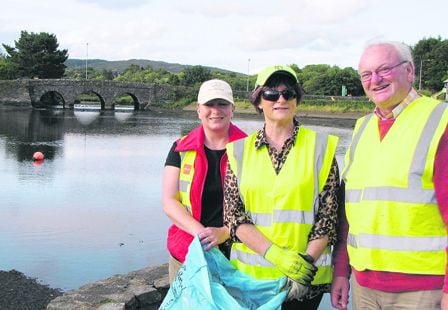 It’s a sunny Wednesday evening at the Ballydehob estuary. Tidy Towns volunteers are donning hi-viz vests, brandishing litter spikes and naming those carelessly discarded items they will most likely encounter in the next couple of hours.

A number of volunteers meet every Wednesday to pick up litter. They are led by the current Ballydehob Tidy Towns committee made up of John Forde, Ann Redmond, Lorraine Swanton, Gerard Coughlan and Julian Dearden. Their aim is to build on the foundation of good practice established by the previous committee and to encourage community participation.

They believe that Tidy Towns is more than picking up litter and planting flowers; it is about community and pride of place. This is in keeping with the ethos of the Tidy Towns initiative first launched in 1958 to encourage communities to improve their local environment.

The annual competition fosters a friendly rivalry between towns that compete for generous monetary prizes and the honour of earning the Tidiest Town title. However, according to the Tidy Towns website the competition has always emphasised participation over winning prizes, ‘as the very act of taking part brings benefits to the community.’

Yes, towns get points for litter control and landscaping. But there is so much more. Points are also awarded for strategic planning, excellence in sustainable waste management, preservation of wildlife and nature and most importantly- community involvement.

One of their first and most productive jobs that the new Ballydehob chapter accomplished was to start a Facebook page on which they share their achievements and concerns with the public and appeal for help. It has been a success so far as this is how they get many of their clean-up crew. ‘One day last year we posted that we welcomed volunteers on Wednesday evenings to help pick up litter and about 20 of the little scouts arrived to help – it was so great,’ remembered Swanton.

They have also continued the national school arts competition in which pupils create posters to promote a certain environmental issue. This year’s theme was biodiversity.

In partnership with Tidy Towns, teachers explain the issue to the students who then draw pictures to promote it. The winners get their drawings displayed locally which helps spread the word about biodiversity and the well informed children hopefully bring these good practices to their homes.

Cleaning up litter and raising awareness on environmental issues are only the tip of the melting ice berg. Volunteers stay plenty busy with general maintenance of weeding planting and painting, etc. Bigger jobs sometimes need doing as well. Community involvement has been vital to achieving many goals.

With substantial help from local residents all entryways into the village were recently given a much needed face-lift. ‘All we needed to do was ask. As soon as we did people were very happy to help- as if they had been waiting,’ said Forde.

For bigger jobs, the committee feels fortunate to have the backing of the local Cork County Council supervisor Kevin Barry and area engineer Sarah Synott. Ms Synott is open to suggestions and often advises the group on how to accomplish certain projects, while Mr Barry and his crew help facilitate those projects when possible. It was this teamwork that facilitated the clearing of seriously blocked drains on the main street last year.

Work schemes have proved extremely valuable as well, especially since the village lost the council worker that had been responsible for general street and park maintenance. ‘We have a community employment worker assigned to tidy towns in Ballydehob. This is in addition to our Tús worker and the gateway workers of Cork County Council,’ explains Forde.

Most gratifying is when scheme workers are perfectly matched to jobs that really need doing. As luck would have it, a professional stonemason was working with Tidy Towns on one of these schemes, which meant that much needed repairs to the long-battered three-arch bridge could finally come to pass.

With basic maintenance and general upkeep just about in hand, the group will spend the next months focussed on the estuary and surrounding areas. They understand that Ballydehob is the gateway to the Mizen and that one never gets a second chance to give a first impression. They will enhance the area so that visitors might be swayed to stop in the village or venture deeper into the peninsula.

They have already installed sculptures with a promise of more to come. Next year they will landscape the island and provide under lighting for the bridge to better highlight this historically relevant piece of magnificent architecture.

Of course there will always be set backs: Recently, vandals destroyed brand new flower boxes that had been mounted on the three-arch-bridge. Hard work went into funding and securing them.

Forde says the acts of vandalism are made by, ‘cowards who work under the cover of darkness,’ adding that although it is disappointing and sad that someone could do such a thing, ‘in no way does it deter us.’

This committee will keep picking up smelly fag butts and sticky Lucozade bottles. They will keep making plans for the future. They will keep inviting the community to join them in projects that benefit everyone.

And they will keep instilling pride of place by their example.

And sure, if that means that they win the honour of tidiest towns come September, how bad?

To offer your time or offer suggestions please contact John Forde at 086-6065894 or at [email protected] or on Facebook.