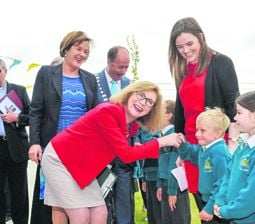 Senior students from the school welcomed the County Mayor Alan Coleman, Bishop John Buckley along with Minister O’ Sullivan at the foundation stone. All the students then formed a guard of honour to the front door and stood to attention to sing the National Anthem, while Minister O’Sullivan, assisted by junior and senior students cut the ribbon to formally announce the school open.

The co-educational school’s new building consists of 16 classrooms, a general-purpose hall, a library, support accommodation, two playgrounds and a play area and there are currently 185 pupils enrolled in the school.

School principal Susan O’Hanrahan thanked the Department of Education and spoke of the need for quality education.

‘To make it the best, let us create a school where you want to be. A school where learning is fun, a school where teachers are trained, not in theory, but in reaching out to you, in engaging, in questioning, in challenging and awakening your curious minds,’ she said.