'You have the parties going door-to-door saying Michael is alright, give us your vote. But if that happens on the day, I’ll be sunk,'says Michael Collins TD, who was out on the canvass in Bantry last Friday and, below, with local man Michael Kelly, who wants to avail of the 'hip op' bus to Belfast. (Photo: Andy Gibson)

THE last person Michael Collins spoke to – after completing a circuit of Wolfe Tone Square on market day in Bantry last Friday – was Michael Kelly, a man seen leaning on a crutch to combat the desperate pain he has in one knee and both hips.

Michael Kelly, from Durrus, said he was two years in ‘the system’ before speaking to Danny Collins, the Independent TD’s brother, conduit, and councillor on the West Cork Municipal District.

‘I am in a bad way. The pain is desperate,’ Michael told his namesake, Michael Collins – a man who had been up since 4.30am that morning to collect the seven people from West Cork who were joining 13 others on the 52nd bus to Belfast for cataract operations, as well as hip and knee consultations. Michael said he’d ‘have him right’ within 10 weeks.

When asked the rather obvious question, ‘Who will you be giving your number one to on February 8th?’ Michael Kelly said: ‘Michael Collins.’ 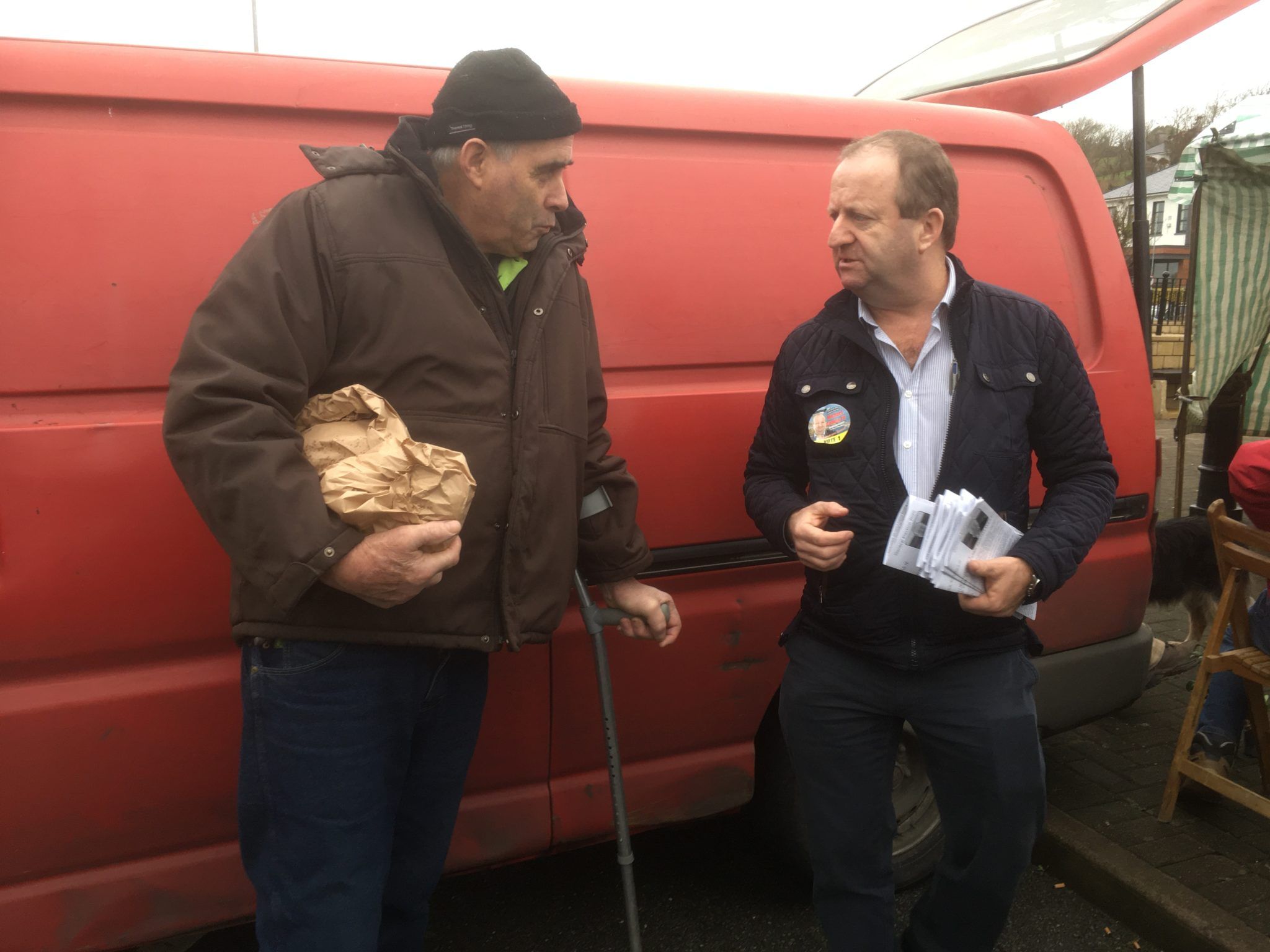 Michael Kelly from Durrus is opting out of the 'traditional' healthcare system to take the Belfast Bus organised by Michael Collins TD.

The downside to having a reporter trailing an apparently popular TD is that comments like: ‘Go away, move on, don’t waste your time with me, you have my number one’ puts too much of a gloss on the candidate.

Take, for example, the man – a card-carrying member of Fianna Fáil – who was rushing to meet Margaret Murphy O’Mahony at the opposite end of the square. He told Michael: ‘You are 10 lengths ahead with no fences to jump.’

Michael Collins didn’t appear overly happy to hear this. Looking to the notebook, which was rapidly filling with positive testimonials, he said: ‘You have the parties going door-to-door saying Michael is alright, give us your vote. But if that happens on the day, I’ll be sunk.’

When it was put to him that he may top the poll, Michael looked positively pained. He said: ‘All I want is to win a seat in Cork South West, so I can continue to work for the people of West Cork.’

For all the kudos, Michael is not universally liked. Some say he is a racist. ‘What I said,’ he told The Southern Star, ‘was, “We must make sure our homeless are looked after first.” I stand over that but if I could change anything I’d say “equally” because it is a very big problem.’

Everywhere, the most pressing issues are the fear that Bantry hospital will be downgraded; the condition of the roads; homelessness and the housing crisis; and the pressure on the farming and fishing industries.

Bantry, last Friday, was wet, windy and grey, but it was also shot through with humour. Michael, passing a chicken and egg stand, captured the mood of the day when he lifted an egg and said: ‘I will not count my chickens before they are hatched.’