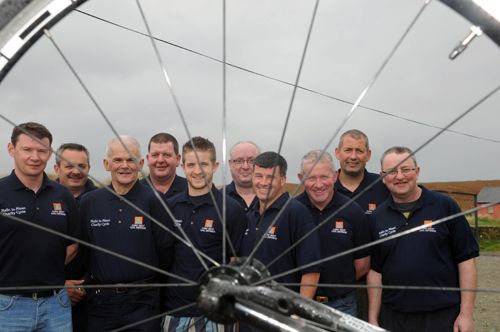 TEN members of Cork West Civil Defence will undertake a 644km four day cycle from Malin Head to Mizen Head from May 13th-16th, with all proceeds of the cycle going to charity.

Two West Cork organisations will benefit from the cycle. Living Links provides outreach and support to those bereaved by suicide. It provides trained personnel who are available to offer confidential, practical support and information to families and individuals who have experienced a death by suicide.

The second beneficiary is the Friends of Jamie Wall. Jamie who hails from Kilbrittain, was a budding young athlete who had represented Cork at minor, Under 21 and intermediate in both hurling and football. In the Carbery division, he played for his own local club, along with the Carbery senior team.

A trainee teacher, at the tender age of 21, Jamie was struck down with a serious infection, which infected his spinal cord and has left Jamie paralysed. His determination in his rehabilitation programme has seen him make good progress in adapting to his new way of life. The Friends of Jamie Wall has been set up to aid Jamie with his rehabilitation.

The team of cyclists and support from Cork West Civil Defence are Garry Minihane, Denis O’Sullivan, Liam O’Regan, Michael Kirby, Shane Keohane, Niall Twomey, Steven Anderson, Don O’Sullivan, Des Quinn and Pat Fitzgerald. All cyclists have sponsor cards and if anyone would like information on the event or would like to make a donation please contact Garry Minihane (086) 8328394.