Professor Martin Tangney, originally from Macroom, being presented with the prestigious innovation award and a cheque for €10,000 at the European Parliament by Carlos Moedas, the EU Commissioner for Research, Science and Innovation. 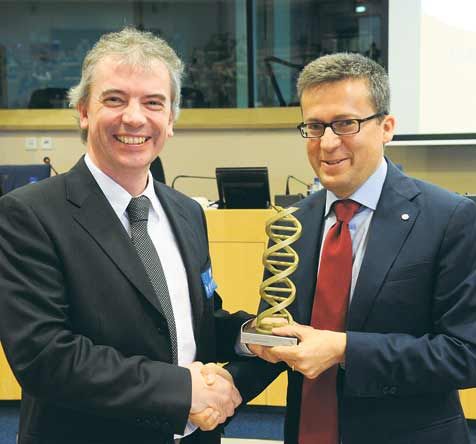 Professor Martin Tangney, originally from Macroom, being presented with the prestigious innovation award and a cheque for €10,000 at the European Parliament by Carlos Moedas, the EU Commissioner for Research, Science and Innovation.

A COMPANY founded by Macroom native Professor Martin Tangney, has been named Europe’s most innovative biotech SME after producing the world’s first advanced biofuel, capable of powering vehicles, from the residues of whisky production.

Tangney, a graduate of UCC, was presented with the prestigious award and a cheque for €10,000 at the European Parliament by Carlos Moedas, the EU Commissioner for Research, Science and Innovation for his Edinburgh-based Celtic Renewables company.

The annual Most Innovative European Biotech SME Awards, is organised by the European Association for Bioindustries (EuropaBio) to recognise the crucial role played by small and medium sized biotech firms in responding to some of society’s greatest challenges.

Accepting the award Professor Tangney said: ‘This recognition by EuropaBio and the European Parliament is a tribute to the hard work and dedication of everyone involved with Celtic Renewables.

‘It highlights the importance of the real need to get biotechnologies such as ours to the market and we are fully committed to playing our small part in growing a bio economy in Europe.’

Nathalie Moll, Secretary General of EuropaBio, said: ‘The work and stories of this year’s shortlisted SMEs provide an incredibly inspiring insight into the value, diversity and potential of European biotechnology for citizens.

‘Having the awards presented by Commissioner Moedas during one of Europe’s most important biotech events of the year will undoubtedly play a big part in helping to raise awareness about the dedication of European biotech SMEs to answering our society’s most pressing needs, but we were delighted that Celtic Renewables were the outstanding winners in this award.”

The awards were judged by a distinguished panel drawn from members of the European Parliament, and other biotech experts.

The Jury shortlisted five companies from across Europe for the finals that took place during a Benefits of Biotechnology event in that included keynote addresses from Commissioner Moedas and Vytenis Andriukaitis, the European Commissioner for Health and Food Safety.

Professor Tangney, who studied microbiology at UCC, has invented a process for producing environmentally and commercially-sustainable ‘drop-in’ advanced biofuel (biobutanol) from the 2billion litres of liquid effluent and 750,000 tonnes of barley residue produced annually by the £4billion malt whisky industry.

His company, Celtic Renewables, has developed partnerships with Scottish distillery Tullibardine and Europe’s biotech flagship BioBase Europe Pilot Plant, where it has piloted its biofuel production process with a £1million grant from the UK Department for Energy and Climate Change (DECC).

The company - a spin-out from Edinburgh Napier University’s Biofuel Research Centre - is currently targeting a share of a £25million fund for advanced biofuel development from the Department for Transport (DfT) to build its first commercial scale demonstration facility at a site in Scotland.