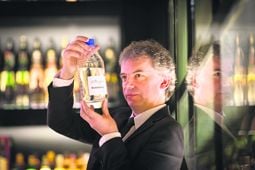 MACROOM native Martin Tangney’s Celtic Renewables is the first company in the world to produce biofuel capable of powering cars from residues of the whisky industry.
The biofuel company, founded by the UCC-graduate professor, now plans to build a production facility in central Scotland after manufacturing the first samples of bio-butanol from the by-products of whisky fermentation.
Edinburgh-based Celtic Renewables has spent the last year developing its process at industrial scale in Belgium as part of a £1m funded by the UK’s Department for Energy and Climate Change.
It is now seeking funding from the UK’s Department for Transport’s £25m advanced biofuel demonstration competition and, if successful, hopes to build its first demonstration facility at the Grangemouth petrochemical plant by 2018.
It is aiming to be the market leader in an industry worth more than £100m to the UK economy.
Ireland’s Consul General in Scotland, Pat Bourne said Martin is a hugely respected figure in renewable energy and ‘a tremendous example of the successful Irish diaspora in Scotland’.
‘Ireland and Scotland have a lot in common, and there is no limit to what we can do if great ideas are supported by a conducive policy and research environment and a positive investment approach,’ he added.