Walkers and cyclists have contacted The Southern Star in recent weeks to say that illegal dumping seems to be out of control since the start of the pandemic. Yet last week councillors voted to increase the entry fee and other charges at their various amenity (dumping) sites

FLY-TIPPING and littering have gotten so bad on one stretch of road in Bandon that one local recently collected a staggering 40kgs of rubbish along near his home in Coolfada.

The man – who did not want to be identified – told The Southern Star that he usually collects the rubbish four or five times a year.

‘I used to put the collected rubbish in my own bins but because there was so much, it was becoming beyond a joke, so I contacted Cllr Gillian Coughlan, who got the Council to collect the bags from me,’ he said.

‘All kinds of rubbish are being thrown out of cars and the stretch that I collected from is only about 200m of roadway. I know I’m not the only person across different areas of Bandon who have to do these clean-ups regularly too.’

Meanwhile, across town, one family recently found themselves cleaning up an area popular for walks off Castle Road after they found the area strewn in litter, including several black sacks of household rubbish.

‘It is such a pity to see such disrespect for a beautiful natural amenity in Bandon and there is an inordinate amount of rubbish in the ditches at the side of Castle Road which requires a more organised clean up,’ Lydia Sims told The Southern Star.

Lydia and her family gathered all the bags of rubbish and they couldn’t fit them in their car so contacted Cork County Council for assistance.

‘There are also two lovely horses there who are at risk of eating plastic, or cutting themselves on broken glass,’ she said.

Cllr Gillian Coughlan has also highlighted the recent upsurge in instances of fly-tipping and littering on the outskirts of the town and paid tribute to him for collecting so much rubbish.

‘I know that right around the county, many individuals are doing the same regularly and I would appeal to people to think twice about littering and find a bin,’ said Cllr Coughlan on a recent Facebook post.

‘Cork county councillors have been resisting proposed hikes at civic amenity sites for this very reason.

‘It is very unfair on the hundreds of Tidy Town volunteers, not to mention local residents and landowners, to have people deliberately despoiling our environment. 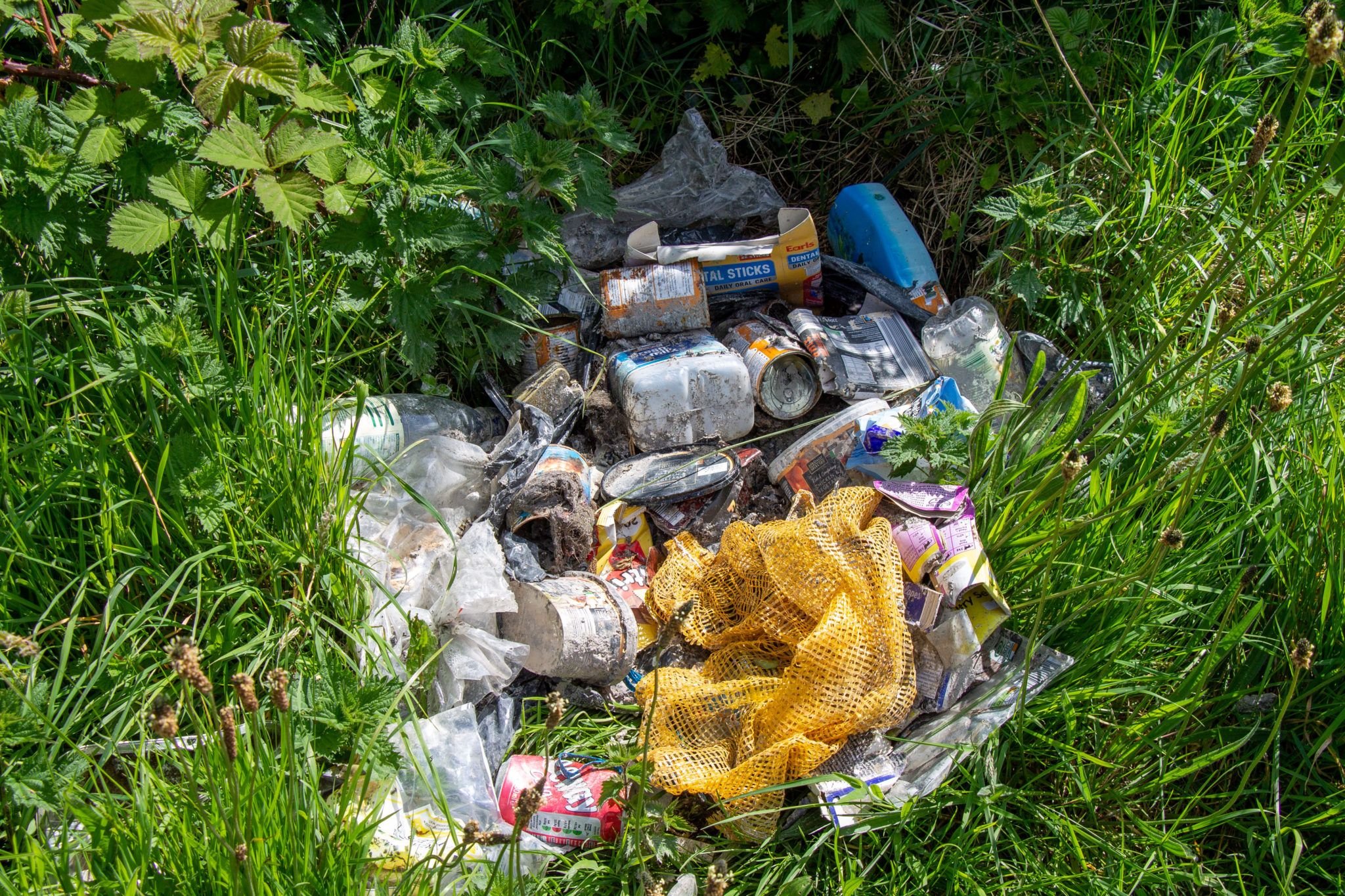 Rubbish left in a ditch on the popular tourist road between Tragumna and Castletownshend. Photo: Andrew Harris

‘We need to keep fees low so that the fee is not a deterrent to the appropriate disposal of domestic abuse.’

However, since then, councillors voted to increase the entry fee at civic amenity sites from €3 to €4.

They voted 26 to 14 in favour of the increase, along with more increases for dumping of actual items.

DISGUSTED by the dumping of more than 25 bags of rubbish in the countryside, the community of Bantry recently took matters into their own hands to clean it up.

A group of four volunteers went out to a location where tens of bags of clothes had been dumped at a rural spot at Dunbittern East – and re-bagged the items. 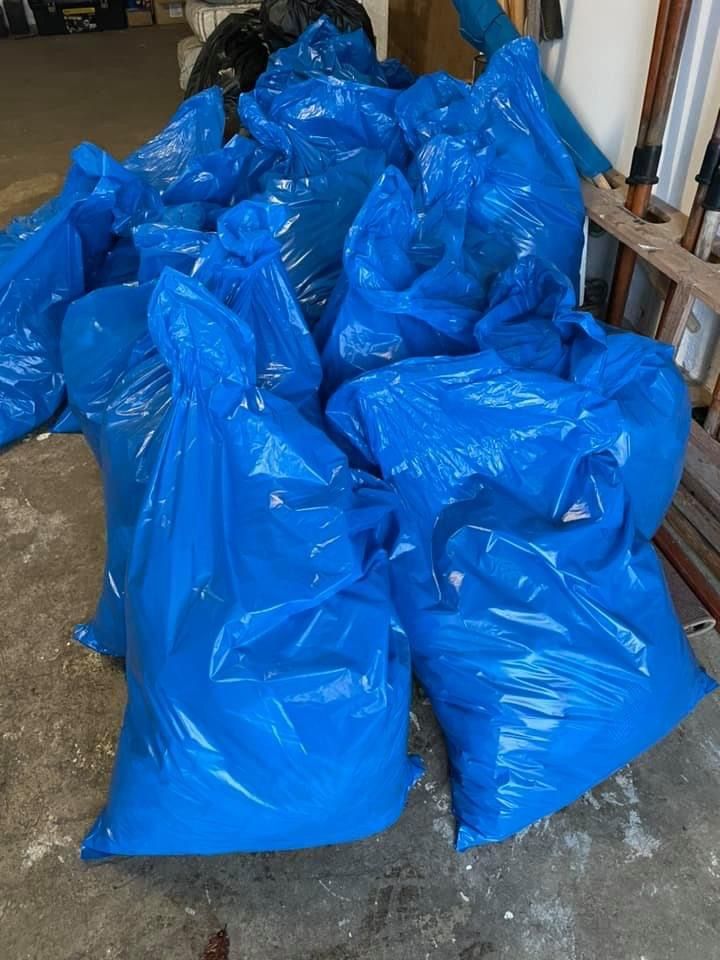 The textiles bagged and sorted by volunteers

Five bags were taken to the Council depot in Bantry for dumping, and 20 bags – mostly clothes and shoes – were taken away, washed and dried.

The recovered clothes were sold to a company that pays by weight and the proceeds were donated to a local sporting organisation.

Meanwhile, gardaí confirmed they are investigating the illegal dumping at both the Bantry site, and another near Crookstown.

Cllr Danny Collins said the owner of the Bantry site – who had already put bollards in to try and prevent fly-tipping – was notified of the incident.

The only problem with that, according Cllr Collins, is that the Council’s usual practice of going through the rubbish to try and identify the culprit has been suspended due to Covid-19 restrictions.

‘Fly-tipping has increased all over West Cork in recent months,’ he added. ‘Every week, I am being contacted by people who are discovering new, illegal dumps in the countryside.’

A spokesperson for Cork County Council told The Southern Star later that if the refuse is, as appears to be the case from photographs, of a textile nature, then it is beyond the remit of the litter warden.

Cllr Collins said he will be calling for the installation of temporary cameras in trouble spots to try and catch the perpetrators.

However, last month Waterford City and County Council was reprimanded by the Data Protection Commissioner, for its use of CCTV to monitor littering blackspots.

Meanwhile, gardaí on patrol at Crookstown believe they have identified the person who threw rubbish from a fast food outlet on the road between Aherla and Cloughduv.

Gardaí said: ‘A receipt was located in the litter and a registration of a vehicle was obtained from CCTV from the drive-through.’

Supt Kenneally said  gardaí will liaise with Cork County Council and its litter warden on matters relating to illegal dumping.

‘In situations where a perpetrator can be identified,’ he added, ‘the gardaí have powers to bring a prosecution under the Litter Act.’

Cllrs in favour of rise in charges

COUNCILLORS have voted to increase the entry fee at their 11 civic amenity sites from €3 to €4 after what was a lengthy, and sometimes confusing online meeting of the local authority last week.

Confusion reigned over what proposals were being voted on, until eventually councillors voted 26 to 14 in favour of the €1 increase along with ancillary increases inside the sites, with three members abstaining. 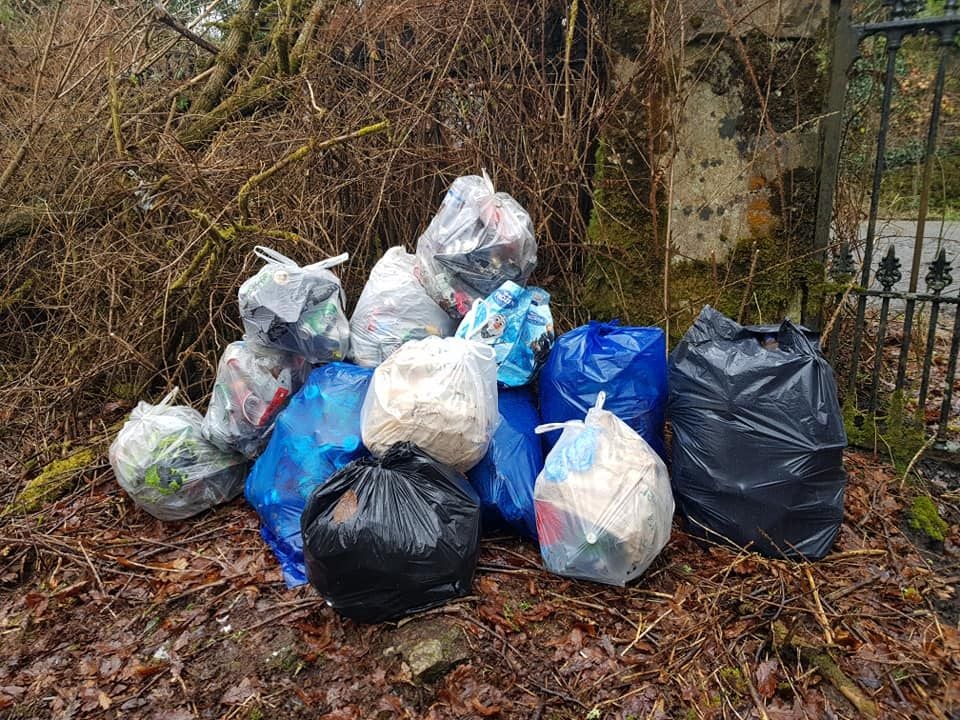 Bags of rubbish collected on Castle Road in Bandon.

Several councillors said that any increase at the gate at the sites could lead to even more cases of dumping and fly-tipping and called for a review of services before any price hikes.

However, Council chief executive Tim Lucey warned that a review could take 12 months and threatened if members didn’t vote for an increase, he would have to use his executive powers to introduce them anyway as he has to make up for a loss of €3m in operating the sites.

Cllr Alan Coleman (Ind) said a €1 increase at the gate might be more ‘palatable to the public’ rather than a series of increases inside and said the Council has gotten a lot of bad press on this, including the front page of The Southern Star recently.

Cllr Danny Collins (Ind) said he feared an increase would lead to household goods like armchairs and sofas being dumped in remote parts of West Cork.

‘We should be doing a review on how the sites are losing money before we put up the prices,’ said Cllr Collins.

Cllr Paul Hayes (Ind) said the Council needs to look at how other schemes are operating around the country, while Cllr Gillian Coughlan (FF) argued that the entry fee must be kept as low as possible.