Ciara O'Gorman and Siobhan O'Donovan from Rosscarbery and Caroline Hurley from Coppeen recently worked as volunteers at the orphanage in Tanzania. Below: the suitcases of toys that Ciara, Siobhan and Caroline brought with them provided endless hours of en 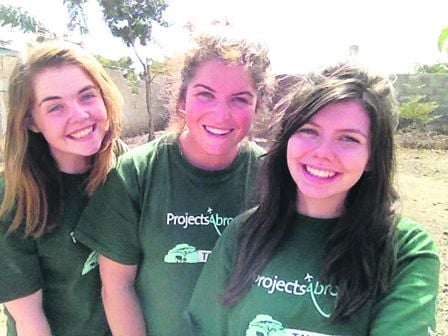 Ciara O’Gorman and Siobhan O’Donovan from Rosscarbery and Caroline Hurley from Coppeen recently worked as volunteers at the orphanage in Tanzania. Below: the suitcases of toys that Ciara, Siobhan and Caroline brought with them provided endless hours of en

THREE young West Cork women have become mothers by proxy after working in an orphanage in Tanzania.

Friends Ciara O’Gorman, Siobhan O’Donovan and Caroline Hurley, all aged 20 and all students at University College Cork, went to work at the ‘Genesis’ orphanage in a village outside Arusha in Tanzania and effectively ‘adopted’ a 12-year old boy called Junior.

Junior was the only child in a group of 18 children at the orphanage who did not have a sponsor for his schooling. That’s where Ciara, Siobhan and Caroline stepped in.

For the price of a cup of coffee each week, they have collectively committed to paying for Junior’s education – not just this year, but for the rest of his time at school.

Ciara and Siobhan, who are from Rosscarbery, and Caroline, who is from Coppeen, decided against taking the typical J1 trip abroad this year and arranged to do volunteer work with ‘Projects Abroad’.

Together they raised €9,000. From that they each paid a €1,800 placement fee, but brought the balance with them to the orphanage in Tanzania. There, they put it to good use by paying to have a water supply connected, and by making provision for the orphanage’s food bill until Christmas.

‘Their diet,’ according to Ciara O’Gorman – who, like Caroline, is studying food science at UCC – ‘consisted mainly of kidney beans but the money that the people of West Cork, and the business community, have provided means they will now have meat three times a week and a steady supply of fresh vegetables.’

It was on a personal level that these young women decided to pay the annual €450 fee to send Junior to the English-speaking school that the other children – who were fortunate enough to have sponsors – were attending.

So instead of being left alone, and spending his days cleaning, Junior will now be joining his classmates at the start of the new school year in January.

Anyone who would like to make a donation to the orphanage and the work that these three women would like to see undertaken – such as the installation of toilets and shower facilities – can make a lodgement to the following account: BIC: AIBKIE2D; IBAN: IE37AIBK93012121682069.