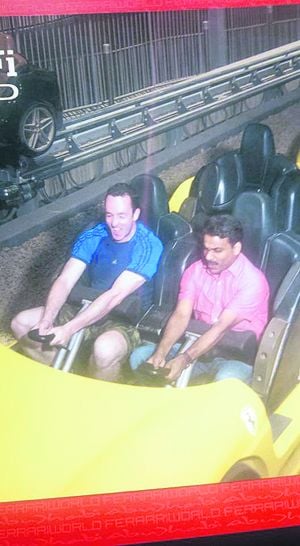 IT’S not very often that you find yourself the top trending story above One Direction on one of the world’s biggest news websites.

But for Liam Murphy (27) from Mishells in Bandon, that was the reality this week as his story went ‘viral’ on Buzzfeed.com.

The former Hammies student found himself at the centre of worldwide media attention after his selfless act to a taxi driver in Abu Dhabi.

Top US chat show, The Ellen DeGeneres Show, has been in contact with him, as have numerous radio stations and media outlets and even Hollywood actress Zooey Deschanel shared his story with her millions of followers.

Liam’s story had 10,000 shares on Buzzfeed.com in two hours.

‘It’s been unbelievable all week since I put up pictures on my Facebook page and I certainly didn’t think it was going to go all over the world,’ said Liam Murphy, speaking to The Southern Star.

‘I’m getting 30 Facebook friend requests an hour, and loads of notifications and it’s taking me all day to go through them,’ he said.

As a test engineer for EMC in Ovens, single Liam was in Dubai for work since last Saturday, and he decided to take a trip to the Ferrari World theme park in Abu Dhabi by taxi.

‘I was talking to Shakiha, the taxi driver, who is originally from India. He said he had been working in the UAE for the past 14 years, and had never been inside the theme park. He was also sending money back to his family in India,’ he recalled.

‘I asked him what he would do for the four hours I would be in there, and he said he would wait outside for me. I just said “that’s mad” and asked him would he come in with me and I would pay the €61 for his ticket.’

‘He had very poor English,’ Liam noted, ‘but we had a ball and he was really grateful. It was his first ever roller coaster ride which just happened to be the fastest in the world – the Formula Rossa Ride – and I had some craic with him for the day.’

A senior director from EMC in the US has also commented on Liam’s kind gesture, and Liam has been blown away by the coverage.

‘It was a small thing to do, but also a positive story,’ he said.

Liam spoke with Adam Daniels from The Ellen DeGeneres Show and they said they want him to appear live on the show in September.

‘We will see what happens,’ he said.