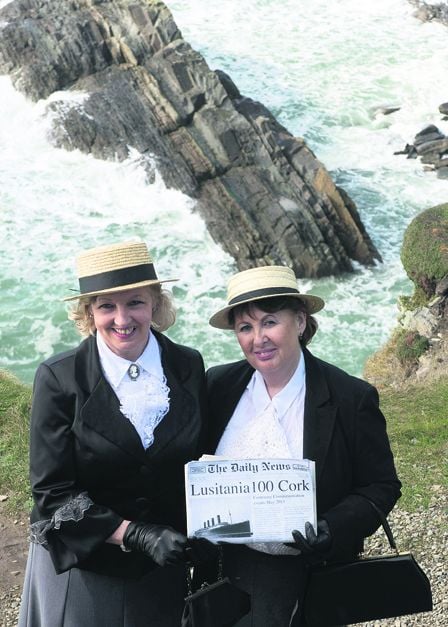 Irene and Carol O'Driscoll were at the launch of Lusitania100 Cork at the Old Head of Kinsale (Photo: Martin Walsh)

A SERIES of commemorative events, entitled Lusitania100 Cork will see Kinsale, The Old Head, Courtmacsherry and Cobh come together in association with Cork County Council to pay tribute to the 1,201 people who lost their lives in the tragedy.

The Lusitania was en route to Liverpool from New York when it sank off the The Old Head of Kinsale after being targeted by a German U-boat in 1915.

The series of events will not only pay tribute to all those who lost their lives, but also remember the gallant efforts of their ancestors who responded with great courage and compassion to rescue survivors, the bereaved and recover the dead in ordinary fishing boats and lifeboats.

Events planned for the commemorations include wreath laying ceremonies with President Michael D Higgins in Cobh, and Minister Simon Coveney at the Lusitania monument on the Old Head, both at 2pm on May 7th, the time the tragedy happened.

A number of re-enactments of the tragedy will also take place with Courtmacsherry recreating the call to service of the RNLI lifeboat.

They have made a replica of the ‘Kezia Gwilt’ that rowed 12 miles to the Lusitania in 1915.

Cobh will remember their rescue efforts with a twilight flotilla of work boats, fishing boats and pleasure craft, each illuminated with white lights.

Cobh will also re-enact the mass funeral procession, while Kinsale is recreating the aftermath inquest with descendants of the 1915 jury.

The Old Head Signal Tower is being restored and transformed into a Lusitania museum, which will be officially opened on May 7th and there are plans to exhibit artefacts recovered from the wreck.

Eventually the museum will also host an iconic piece of sculpture with the names of all who sailed on the Lusitania on May 7th 1915.

A replica of the ship which had its ‘maiden voyage’ at the recent Courtmacsherry St Patrick’s Day parade is also on display in Courtmacsherry. It got a huge reaction at its ‘unveiling’ at the parade.

Kinsale History Society and the Port of Cork have both launched schools initiatives, encouraging primary and secondary students to learn more about the Lusitania.