Kieran Nolan and Eamon Jackson of Kilbritain-based company ICP Newtech, with their ROVs, Defender and Vanguard 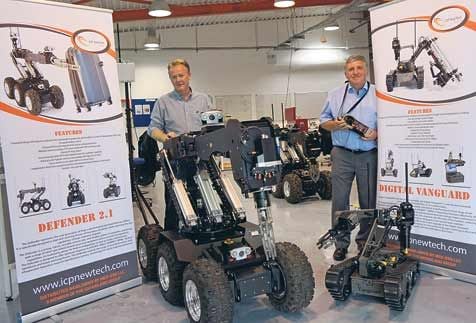 Kieran Nolan and Eamon Jackson of Kilbritain-based company ICP Newtech, with their ROVs, Defender and Vanguard.

Based in Kilbrittain, ICP NewTech is the brainchild of Eamon Jackson and Kieran Nolan, who together now employ 28 staff and are seeking to expand.

‘We are very proud of the fact that the equipment we make here is life saving and you could say it’s a humanitarian product, as it actually saves lives,’ said Eamon Jackson, CEO of ICP NewTech, speaking to The Southern Star.

‘People think of places like Iraq and Afghanistan that the ROVs would be needed but it’s actually the domestic market that we focus on, like unexplained WWII bombs and our clients would include the Gardaí and other security groups. It’s a case of sending in these machines to render something safe,’ he added.

‘The support from the local area has helped us to get up and running and the location here in Kilbrittain means it’s convenient place to work and our staff come from the vicinities of Bandon, Kinsale and Clonakilty.

Both Eamon and Kieran worked for Allen-Vanguard, a world famous robotic company at their base in Kilbritain that closed in 2008.

‘We always had it in our plan to work together at some stage and we knew this was the right thing to do and we set up this company in 2013. We wanted to design our own type of models and we got the chance to purchase the company’s ROV division when we heard they were shutting it down in the UK and moving it,’ said Kieran Nolan, COO of ICP NewTech.

The company’s two main products are a large robot, called the Defender, and a smaller robot called the Vanguard and having signed an agreement with Med-Eng/ Safariland, it means that the company has never been busier.

‘We have a lot of experience and contacts in the industry and it’s important that we’re trusted too in this industry. We’re embarking on a huge research and development programme and our next stage is to purchase the facility here in Kilbrittain and we are currently hiring for a number of positions.’

The company has already opened up a facility in Ottawa, Canada and they also have a representative in Alabama, in the United States as well as exporting to Africa, Asia, Europe and South America.