Brian Galvin is among the finalists for the Macra FBD Young Farmer of the Year 2015. (Photo: Martin Walsh) 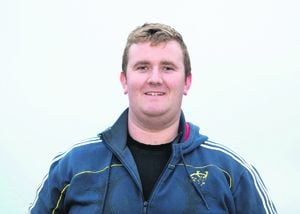 Brian Galvin is among the finalists for the Macra FBD Young Farmer of the Year 2015. (Photo: Martin Walsh)

TWENTY-TWO year-old Brian Galvin is keen to return to playing rugby, his sole sporting interest. However, right now, the Kilbrittain farmer is rock solid behind his own lifestyle and having worked for other farmers, he says there is nothing like being your own boss.

‘I was always interested in farming, I took over, or should I say I’m in the process of taking over from my father, this is our first year back in the cows since about three years.’

The 100-acre third generation farm in Clashavanna just outside the village is all about dairy – 90 milking cows, 22 heifers and 40 calves and two bulls to be precise.

It’s also a case of back to the future for the Galvin’s as Brian explains. ‘My father was in construction and, at the time, it made more financial sense to go with construction rather than the cows. There was too much on his plate to do both and we decided that we would sell the cows and go into a partnership with a local farmer. That ended after three years and now we are back.’

Brian is the eldest son of Paddy and Elma; the remaining family members are Sinead (23), Killian (18) and Eoin (14). ‘My younger brothers help out of the farm as much as they can outside of their studying, while Sinead is wheelchair-bound and attends the Cope Foundation in Cork five days a week in Cork.’

There is a direct and quick response to the abolition of the EU milk quota: ‘I was always wary of the quota going, my father and grandfather said that the day the quota would go, fellas would lose their heads, there would be too much milk for what they can sell, as the country was already selling as much as they could.

‘As we see now, milk prices have gone down, although not too bad around these parts, but it’s still putting us under pressure.’

Expansion in terms of herd numbers will most likely happen within three years, the infrastructure and facilities are already in place. Relying on his own consultant Johnny Crowley from Kilbrittain, Brian reckons some of the farm advisory services fall short of the line.

‘I’m very lucky that I have my own consultant, Johnny Crowley from Kilbrittain, he’s a private consultant. I’m also using a nutritionist from Devenish Nutrition and they give me a lot of advice; I don’t really go through Teagasc.

‘The way I look at it, they (Teagasc) misled farmers telling them that the abolition of the quota was going to be super, but its not after turning out so green and it’s put a lot of fellas under pressure, especially the new entrant fellas. Teagasc is not up to scratch in my opinion.’

Although it took a little time to adapt to the paperwork, he is a firm believer in the keeping of records. ‘I have a record and a diary for everything, it must be written down straight away, not tomorrow. In terms of the on-line applications, it’s easy enough to follow and I get help from my consultant, Johnny Crowley.’

For a 22-year-old, the young Kilbrittain man is upbeat and sensible on the future for the family farm. ‘Seventy to one-hundred cows – that’s the family farm, anything over that the family farm becomes a bit commercial. Yes, there is room for it, if fellas can keep their heads.’

Over the last few years Brian was tillage farming in Kinsale. “I enjoyed it but not as much as working with cows. Prior to that, I worked in America with a guy called Rodney Elliott, he’s in South Dakota now milking around 3,500 cows.’

On the advantages of farming, Brian said: ‘Being your own boss and not having to answer to anybody – apart from the Department man. I just like to be in control myself, working on local farms I’ve never felt right as I wasn’t totally involved. Now, I’m taking it from the paper to the practical and back.’

He is succinct on the disadvantages: ‘You never know what you are going to get paid, it’s irregular and never guaranteed.’

Life outside farming is hugely important to Brian, who encourages other farmers to get involved. “I’m chairperson of the local Macra Club. This year, I decided to get fairly involved; I have attended several of the open days and the farm walks and young farmers’ forum.’

Interest in politics seems to follow a family tradition, ‘we were bred on Fianna Fáil as being the way forward.’ He expects to be out canvassing on the doorsteps around Kilbrittain.

Not surprisingly, the FBD Farmer of the Year nominee is not reluctant to recommend a career in agriculture: ‘Yes, but only if you are interested. It is harder for the guys that don’t have a farm and they are better of studying for jobs like nutritionist or an adviser or something like that. Farming is a great lifestyle, but if you don’t get involved in something outside the home, it can get very lonely.’

Brian Galvin is certainly not going on that lonely planet anytime soon.