Saoirse Hayes and her mum Mary. Saoirse has designed a sensory room for her school. (Photo: John Allen) 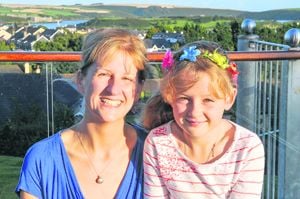 Saoirse Hayes and her mum Mary. Saoirse has designed a sensory room for her school. (Photo: John Allen)

IT might be back to school this week for eight-year-old Saoirse Hayes from Kinsale, but the third class pupil at Scoil Naomh Eltin is celebrating great news with her school.

A 3-D model designed by Saoirse has been shortlisted, from over 1,000 entries, for a ‘Fyffes Go Bananas’ primary school design competition.

The competition invited budding young architects to submit ideas that would transform a shipping container into useful extra school space.

Saoirse’s design for a rainforest-themed multi-sensory room impressed the judges and hers is now one of the top ten entries to go forward to the final.

‘Saoirse’s teacher Dara-Anne Neary rang us last week to let us know that Saoirse’s entry had made the final and we were blown away with the news,’ said Mary Hayes, Saoirse’s mother, speaking to The Southern Star.

‘She came up with the whole idea after Julie Deasy, a student teacher in the school, did a class on rainforests and then Dara-Anne taught them about multi-sensory rooms. So she incorporated the two themes to build a 3D model and she painted it and added different items to her rainforest-themed multi-sensory room.’

‘Her teacher Dara-Anne was a great help to her and Saoirse worked on it at school and she added things like bookshelves, plants, monkeys, a water feature and even got to include bananas in the design. It’s great that she has made such a great job and both John her father and myself are so proud of her.’

As the school will now have two ASD classes, a multi-sensory space would be of great benefit to the pupils there.

‘We’re a brand new school here and the only thing that we are lacking is a multi-sensory room. These rooms are ideal for anyone, even for those who are having a bad day,’ said Dara-Anne.

‘Saoirse is great and she came up with the theme of the rainforest for her multi-sensory room herself, and incorporated all the five senses into the model. She’s also very good at Maths and so she decided to make a 3D model of it. We all very proud of her here in Scoil Naomh Eltin.’

The overall winner will be announced in September and the winning work will be bought to life through a remodeled shipping container, fitted out to the winning student’s design and installed at his or her school.