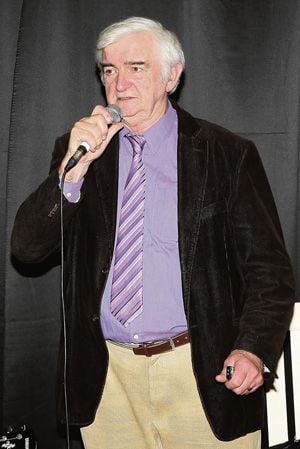 A GRAND nephew of James Joyce won the Clonakilty Heat of the Over 60’s Talent Competition last week.

Phil Joyce, originally from Dublin, was one of the eight contestants to participate on the night. He has been living in Cork for 40 years and is married to Teresa O’Donovan from Clonakilty.

Phil sang ‘John Williamson’ – a song about the Titanic. First to congratulate Phil was his wife Teresa and he was accompanied on stage by his brother John, who plays the guitar.

The event was held at the Darror Community Centre in Clonakilty and was the first time Clonakilty took part in the competition. A large crowd attended on the night, including Monsignor Aidan O’ Driscoll, Fr Eddie Collins and Mary Anglin, chairperson of the Community Association in Darror.

Phil now goes forward to Cork City Hall on April 26th, and another local heat will take place at the Celtic Ross Hotel in Rosscarbery on March 19th.