Nick Weston of Weston Aviation with Clive Power of Cork Airport at the anouncementof the deal this week, which is Weston's first base outside the UK. 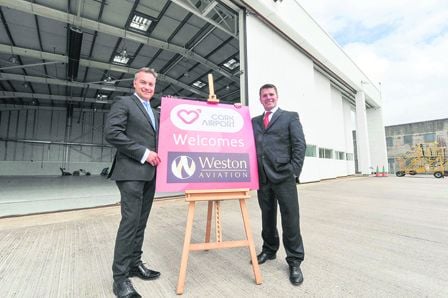 Nick Weston of Weston Aviation with Clive Power of Cork Airport at the anouncementof the deal this week, which is Weston’s first base outside the UK.

CORK Airport this week welcomed its newest partner, Weston Aviation, as it signed a long-term contract to open its new Business Aviation Centre at the airport.

The Business Aviation Centre at Cork Airport is Weston Aviation’s first venture outside of the UK and the firm will be recruiting a local team in areas of sales, administration and ground handling.

As the company takes up residence at the executive hangar and office facility at the airport, this will be the first time that executive aircraft can avail of a hangar service at Cork Airport.

The opening of the Business Aviation Centre marks the company’s move to expand internationally and the new facility will be open for business in September.

Speaking about the new venture, Weston Aviation’s managing director, Nick Weston said it was Weston Aviation’s first move outside of the UK. ‘We chose Cork Airport as our first international base for a number of reasons – key was the number of global businesses based in the region as well as the growing local economy. We believe that there is real scope to significantly develop our client base in Ireland from Cork,’ he said.

‘Many of the companies based here may be new to the private aircraft charter services that we provide, so will not be fully aware of the benefits we can bring to a business such as flexibility and cost efficiency. We were also drawn to Cork Airport because of the size and structure of the airport as it is similar to that of our other airport partners, where we continuously invest to develop our business.’

Weston also announced that the company will be recruiting over the coming months. ‘We will be looking to initially recruit a team locally. These positions will be in sales, ground handling and administration and over the next two years we plan to expand the Irish team. It’s a very exciting time for Weston Aviation and we’re looking forward to growing our business at Cork Airport,’ he said.

Welcoming Weston Aviation, Clive Power, head of finance and commercial at Cork Airport said the move was a positive sign for the local economy that a company such as Weston Aviation sees the potential in the region. ‘It is also an endorsement of our first-class facilities at the airport, which includes one of the most modern terminal buildings in Europe,’ he said.