LOCALS in Kilcoe concerned about the dilapidated state of their church, which dates back to the 1400s, are hoping a conservation report will help guide their plans to improve the historic ruins.

The Kilcoe Medieval Ruin Restoration Group was recently awarded €1,500 under the Council’s heritage grant scheme to fund a report by an archaeological engineer into the church.

However, despite being €714 short to cover the overall cost, a GoFundMe drive helped them reach their target in no time at all.

The group is hoping that ivy can be safely cut back so that the original edifice and unique features of the church can be properly preserved on the gothic structure.

‘The vegetation is so thick that is penetrating the walls causing the seaward wall to crack, buckle and crumble and we need it expertly removed to avoid additional damage,’ said Isobel Towse of the restoration group.

Brigid O’Brien from Lisheen initially raised her concerns about the church ruins several years ago as she felt that it was such an important building that it ought to be cared for and protected.

‘There are lovely windows there but they are just covered in ivy and it has got worse over the past few years.

‘I feared that if we didn’t do something soon it would be too late,’ said Brigid.

She also pointed out that one of the Fastnet Walking Trails goes near the ruins of the church and that it’s valued in terms of tourism. 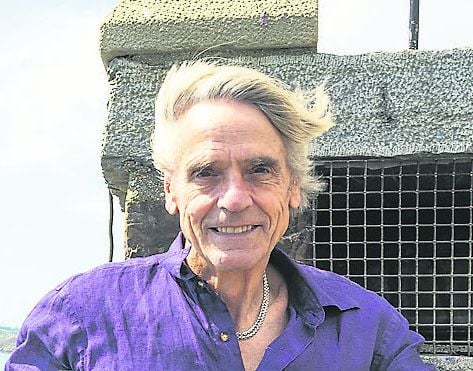 Actor and local resident Jerremy Irons, who has lent his backing to the plans.

Their campaign to help secure the church has even been endorsed by a famous local and near neighbour, Oscar-winning actor Jeremy Irons, who lives in Kilcoe Castle.

‘I know the church well and was there recently and had been thinking for some time about cutting down the ivy which must be doing harm, but wasn’t sure of ownership,’ said Jeremy.

‘I would be delighted if the Council could find the resources to protect this little piece of our heritage.

‘We are our history and we must respect, protect and preserve that history if we are to respect ourselves.’

He added that he believes that Kilcoe Church was built even before the Kilcoe Castle, at the time when there was a smaller Norman Castle on Mannin Beag.

Meanwhile,Cllr Ross O’Connell (SD) raised the issue at a recent divisional Council meeting and asked for clarity on who owns the ruins and who is responsible for the upkeep of the Kilcoe Church ruin.

Council officials said that a conservation report by a suitably qualified conservation engineer would be needed.

Cllr O’Connell pointed out that the old Catholic Church at Kilcoe, which overlooks Roaringwater Bay, dates back to the 1400s and is believed to have had associations with Naomh Ciarán of Cape Clear.

‘It included many medieval features and is listed in the current County Development Plan as a protected structure.

‘But in recent years ivy on the structure has overtaken it completely and is obscuring many of the features of the church, particularly the fine east-facing window, which has featured in Irish archaeological journals and in the Royal Irish Academy Library,’ said Cllr O’Connell.

‘Such has been the growth of ivy over the past 10 years that this window is no longer visible and it is with deep upset that locals in the area see this happening to the structure.’

He pointed out that a survey of the graveyard was carried out in 2012 through funding from the Heritage Council but not of the church.

‘The report resulting from the survey was presented to libraries throughout the county and is available to search online via the Skibbereen Heritage Centre website.’

The group is hoping that once the church is in better condition, the Council will then be able to carry out regular maintenance through the periodic and safe removal of vegetation.

Meanwhile,  every donation over €5 that the group receives on GoFundMe to fund the conservation report, was entered into a draw.

Various prizes that were up for grabs include a sailing trip to the site of the medieval ruin in Roaringwater Bay, on a traditional wooden boat with Nigel Towse.

The draw took place on Thursday July 14th at nearby Minihan’s Bar.

Meanwhile, as part of Heritage Week, local historian William Casey will  be giving a historical talk at the Church ruins on Sunday August 14th and all are welcome to attend.