Nuffield scholars having their picture taken with their hosts in a wheat field in Hikkiado, Japan. They were entertained by a young farmers' discussion group, taken on tour of the farm and given a beautiful barbecue, which wives and families attended too. 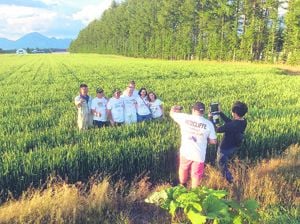 Nuffield scholars having their picture taken with their hosts in a wheat field in Hikkiado, Japan. They were entertained by a young farmers’ discussion group, taken on tour of the farm and given a beautiful barbecue, which wives and families attended too.

MÁIRE McCarthy of Innishannon, a Nuffield Scholarship winner, is travelling around the world investigating farming practices and meeting government agriculture officials across the globe. This week’s report comes from Japan.

From Jakarta in Indonesia, we flew overnight to Japan. Jodie and Wayne Redcliffe, Nuffield support staff, met us at the airport and we checked in to our hotel.

We met Christina who took us to major supermarkets and we sampled agri products including wagyu, fruit and fish. There were packs of wagyu beef being sold at €60 per kilo.

We had a very nice noodle lunch at €6 per head, which was great value. I had my first lunch with chopsticks. We returned to the hotel and did some washing!

Next morning we started a very busy day – we met in the Australian embassy in Tokyo. We met Australian trade ambassador and various other department of agriculture people who told us about Japanese agriculture, which is 39% self-sufficient so they are importing 61%.

We went for dinner with Andrew Cox, head of Australian trade in Tokyo. He has three children and told us he has been learning Japanese for 12 months.

We went to a typical Japanese restaurant where we ate wagyu beef and drank saki (rice whiskey). We then went to a Japanese karaoke – which was very different!

We visited the Deptarment of Agriculture and met seven members of the staff and learned some very interesting facts about Japan. There is a dedicated member of senior Department officials for each area of produce, including sheep, beef, dairy, poultry, honey, bees, etc.

It is only 45% self sufficient for food in that it has to import in excess of 50% of its food requirement from other countries. The aim of the Japanese government is to get up to 50% food security and they are doing all that they can, including financial aid, to achieve this.

The average age of farmers is 65 and there is a major issue with succession and the lack of young farmers. The government has started a number of initiatives including incentivising women to take up the role of young farmer, set up subsidies and aid towards machinery and land purchase. They explained to us that one are of Japan Hokiado is the food basket of Japan and it produces 120% more than the area needs.

The Japanese Government is very much involved in supporting the primary producer with research, advice and subsidies (where necessary). One of the major costs for Japan is the high cost of feed – which is being imported.