THE Youghal woman who was stalked and harassed by her former co-worker has urged people to rally around his family.

Una Ring said that she would never forgive James Steele from Rosscarbery for what he had done to her and her family, but she did feel for his own family, given what they must now being going through.

‘I feel a little bit of sympathy for him that he has destroyed his own life, his family’s life. But, having said that, I would be of a different mindset if he had gotten into the house,’ she said.

‘I’m unlucky that it happened but I am extremely lucky that the guards were so dedicated – they sat outside my house from midnight to 5am, night after night after night, just waiting for him. We knew he was going to show up, it was just a matter of time.’

Ms Ring said that Steele’s decision to harass and threaten her took a lot of careful and methodical thought, given that he had to drive from West Cork to East Cork to carry out his crimes. 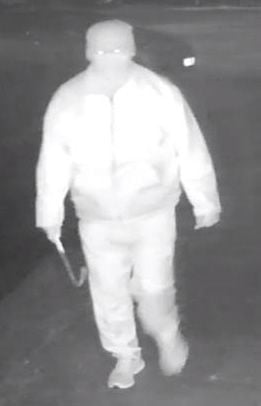 James Steele, caught on CCTV, approaching Una Ring's house, carrying a crowbar. This was just minutes before he was apprehended by gardaí.

‘It’s a long drive from Rosscarbery to Youghal with plenty of time to think about what he was doing, but he continued to carry out a sustained and systematic attack on my family’s privacy and sense of security, with no regard for the fear he was causing,’ she said.

She paid tribute to Youghal gardaí for the support that they had given her after she reported to them that she was being harassed, and the investigation that they launched which ultimately led to Steele being arrested, convicted and jailed.

‘I would strongly urge anyone who is being harassed to contact your local gardaí for advice and have any incident reported should your situation escalate at any stage,’ said Ms Ring.

‘The win for me is not today although we are delighted with the outcome – the win for me was last July when James Steele was arrested on my property and prevented from entering my home and carrying out a brutal attack on myself and my daughter,’ she said.

Ms Ring said the entire experience has had a very damaging effect on her mental health.

‘I was extremely fearful – I was in fear of my life, I really was, it was harrowing ... It has had a profound impact. It has impacted me financially because I can only work part-time at the moment but it also impacted emotionally. I’m still getting ongoing counselling and I’m on medication.’

She said she was fortunate to have an excellent psychotherapist who was helping her on a weekly basis. ‘I will get over it – what am I looking forward to most – just a sense of freedom, being able to go for a walk without looking over my shoulder because now that the sentence is out, I can carry on with life,’ she said, speaking outside the Anglesea St courthouse in Cork.

Ms Ring said she felt that Judge Ó Donnabháin appreciated the impact that Steele’s crimes had on her and her family, as he was very empathetic in his comments.

‘Obviously I would have preferred a higher sentence – there is nothing that is high enough for what I went through, but I am happy enough with it – I knew he wasn’t going to get the full 14 years. I knew it wasn’t going to be what I wanted, but the judge was very fair.’

In her victim impact statement delivered in court, Ms Ring said that when she first met Steele, she thought of him as a respected work colleague and what made his obsession with her all the more disturbing was that they had no relationship other than they worked for the same company.

‘This was not an angry ex-husband or jilted ex-boyfriend – we were not even friends – he was just a man that I worked with and it makes no sense to me. I will never understand why he victimised me and wanted to inflict so much pain on myself and my two children, whom he had never even met.

‘As a mother, my instinct is to protect my children and I was powerless to do so once his stalking began – I feel a huge burden of guilt that my children’s lives were put in danger even though it was entirely out of my control.’

She explained the huge toll it had taken on her children and how, because she was so convinced he would come back to harm her, that she used to tidy up each night before going to bed ‘so the house would be presentable for the crime scene photos’.

She considered getting a tattoo with her name, town name and date of birth on it, so if she was murdered, her body would be quickly identified. A work promotion has been lost now, as Una is only able to work part-time, and the financial toll has been difficult on her, as well as the cost of installing CCTV, extra locks, counselling and repairing damage to her car and home.

She said Steele broke her ‘on so many levels’ and she is terrified of what he might do when released. While she has been diagnosed with PTSD, and is on four types of medication, Steele did not diminish her faith in other people and she said the support she got, including from the gardaí, was ‘phenomenal’.