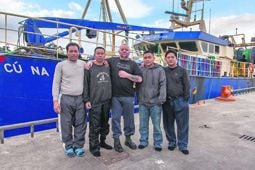 FIVE rescued fishermen arrived safely in Castletownbere at 7pm on Tuesday night after their fishing boat sank in gale force winds off the Isles of Scilly in Cornwall.

The Scottish skipper and his four Filipino crew took to a life raft after their 18m prawn fishing boat, the ‘Kairos’, began taking in water in Force 8 gales shortly before midnight on Monday.

A distress signal was sent out when the Electronic Position Indicating Radio Beacon was activated when it hit the water, and the signal indicated its position 40 miles west of the Scilly Isles and 90 miles south of Mizen Head.

Falmouth Coast Guard co-ordinated the rescue effort, but it also involved two Irish Coast Guard helicopters from Shannon and Waterford, the St Mary’s RNLI Lifeboat from the Scilly Isles, and an Irish trawler, the ‘Cu Na Mara’, which was formerly based in Union Hall, but is now based in Dingle.

The rescued men were taken on board the ‘Cu Na Mara’ to Castletownbere. There they were given a good meal and overnight accommodation to recuperate after their ordeal.