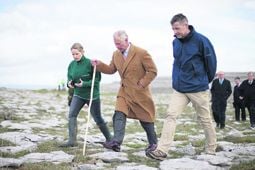 Brigid, a trust co-ordinator with Ireland’s only landscape charity, at the Burrenbeo Trust in Galway, said she was delighted that Prince Charles aligned himself with the charity.

The Prince has a longtime keen interest in farming, education and conservation.

‘We wrote a letter to him a few months ago ahead of his visit to Ireland, and in the meantime the British Ambassador was here too on a visit, and said that Prince Charles would be interested in visiting us,’ said Brigid, speaking to The Southern Star.

‘Then we got a call from Clarence House, and his people came over to meet us and look around the place.’

Brigid said they couldn’t tell anyone about the visit until that morning.

‘To be honest, I didn’t realise what a huge event it would turn out to be as there was a huge security presence there, along with a huge number of press. I wasn’t expecting it to be all over the news and newspapers after the visit, but it has been a great profile boost for the charity.’

The former Oxford graduate of Anthropology has been working with the Burrenbeo Trust for the past seven years with two other team members, and over 260 volunteers, and Brigid said it was a pleasure to meet Prince Charles.

‘He was really charming and very good at making people feel at ease. We weren’t allowed to ask questions but he asked us loads about the Burren and the heritage of the site, and the farming that takes place. He’s very interested in people and the environment, and I was talking to him for about an hour which is a long time in the scheme of things,’ said Brigid.

Brigid’s family in Innishannon were delighted to see her on the news that evening as she didn’t even get a chance to tell them she was meeting Prince Charles.

‘We actually got a message from the British Ambassador that the trip to the Burren was Prince Charle’s favourite part of his trip to Ireland, so we are delighted with that,’ she said.