'The parish priest rushed forward to anoint him. He was dead inside ten minutes.’ (Photos: Denis Boyle)

THE killing of Sgt William Mulherin of the RIC at Bandon church on July 25th 1920 was a pivotal moment in the War of Independence in West Cork.

The killing caused predictable outrage in many quarters, but may have inadvertently altered the course of the war. The killing led directly to the arrest of No 3 Cork brigade O/C (officer commanding) Tom Hales and, indirectly, the appointment of Tom Barry as the brigade training officer by new O/C Charlie Hurley.

Tom Barry described him as ‘the most dangerous member of the British forces in West Cork … the man who controlled all political police intelligence ….’

Mulherin had been threatened by letter and there had been an unsuccessful attempt on his life in March 1920. Thus, Barry continues: ‘He never travelled out with raiding parties and never appeared in public, practically living within the barracks … He was generally escorted to mass by Black and Tans, who, on reaching the Church gates, turned and went back to barracks.’

The church gates in Bandon were at the base of the 16 flights of steps from Market Street up to the level of the entrance to the church. 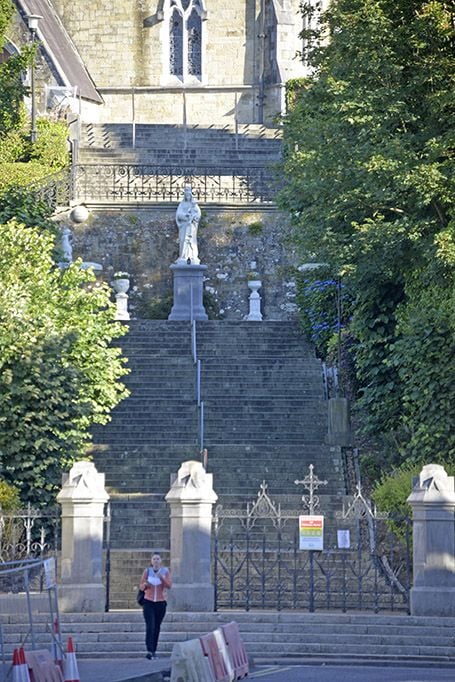 The steps at St Patrick's church in Bandon.

His escort returned to barracks at this point leaving him to climb the steps unguarded. Five members of the IRA formed the protective screen for the two volunteers detailed to carry out the execution. By the time he reached the top of the steps to make the short walk to the church door, he was alone.

Liam Deasy takes up the story: ‘As he was about to put his hand on the handle of the door leading to the knave of the church the volunteers stepped forward and shot him several times. The parish priest rushed forward to anoint him. He was dead inside ten minutes.’

The Cork Examiner the next day wrote of the consternation in the town and that ‘his uniform was scorched, showing that the muzzle of the revolver must have been placed right up to his back.’

The shooting in the Church porch has been described as ‘one of the more cowardly and shameful acts of the War of Independence of which there were many on both sides of the conflict.’

As with all such deaths, the most tragic impact was on Mulherin’s widow and two infant children.

It is easily forgotten that most of the RIC casualties of the War of Independence were Irish Catholics. Parish priest Jeremiah Canon Cohalan, thought to have Republican sympathies, was himself threatened by an anonymous letter, stating ‘that on Sunday morning, July 25th in the year of our Lord 1920, you facilitated the assassination of Sergeant William Mulhern (sic) of the Royal Irish Constabulary in the roman Catholic Church, Bandon … Be it known to you, therefore, that you are doomed. Such swine as you are a disgrace to your country and your church.’ The church was reconsecrated soon after.

IRA GHQ were not too happy, either, particularly Cathal Brugha, Minister for Defence of the first Dáil. Michael Collins was said to be unhappy that he was supposed to have been shot ‘on the way to church’.

One can imagine the outrage, confusion and speculation that such a killing might have engendered in a war that hadn’t yet taken off to its full extent. Despite the notoriety of the killing itself, it could be argued that it had far reaching implications for the war in West Cork, but also for the war nationally, given the importance of West Cork to the overall national effort.

RIC and British army efforts in the area went into overdrive and Tom Hales, O/C of the West Cork brigade, and quartermaster Pat Harte were both arrested on July 27th at Hurley’s of Laragh.

‘The two men were stripped, tied up, and savagely beaten and pistol whipped … Harte was knocked senseless when his nose was smashed by a rifle butt. That night Hales was interrogated and tortured … They beat him again with canes and crushed most of his teeth with pliers but he gave away nothing. Both men spent weeks in hospital.’

While Tom Hales spent the rest of the War of Independence in prison, Harte never recovered from his injuries and died a few years later in an asylum.

Tom Barry was an ex-soldier with active service in the Middle East. There are various narratives about Barry at the time, but he appears to have had trouble ‘fitting in’ after WW1. For a time he palled around with ex-soldiers, but tried several times to join the Bandon IRA.

He was rumoured to be a spy (as many ex-soldiers were), and first came to public attention with his raising of the Union Jack on Armistice Day 1919.

Local volunteers felt he could have ‘gone either way’ and may have felt slighted over his pension. Commandant Tom Kelleher has stated that he was ‘well tested before being accepted’ and that ‘they set traps for him.’

Peter Hart (the most controversial of writers on this period) states that Barry ‘disliked and was disliked by, one of the most important IRA families in the district.’

In any case, within days of Tom Hales’ capture and the appointment of Charlie Hurley as the new brigade O/C Barry was approached, not by the Bandon battalion, but by brigade staff. The initial meeting was in Barrett’s Bar in Killeady, (beside what was then Kinsale Junction railway station). Charlie Hurley suggested Barry become the training officer for the brigade which Barry reluctantly accepted.

Once appointed, Barry got to work holding weeklong training camps during successive weeks in Clonbogue, Kilbrittan and Knockavilla, starting in the final days of September 1920. After each week’s training an ambush was planned by Barry and the brigade officers, the first two being unsuccessful attempts to engage with the enemy. The third week’s camp, however, resulted in the Toureen ambush on October 26th 1920 in which three British soldiers were killed and a number wounded. Prisoners were released on the promise that they would not act against any of the IRA men.

At around this time flying columns were formed and Tom Barry was appointed O/C of the West Cork column. This meant that, in the field, even brigade officers were under his command. According to Barry himself: ‘Only the best types of Volunteers, severely commanded, trained and disciplined’ could fulfil the role of the column. If Hart is to be believed, the Kilmichael ambush was planned and executed by Barry himself, as the Dunmanway training camp which preceded it was the first one where no brigade officers were present.

Whatever about the individual horror elicited by the killing of Sgt Mulherin, it does seem that the event was pivotal to subsequent events in West Cork, given the torture and imprisonment of Tom Hales and the subsequent recruitment of Tom Barry by Charlie Hurley.

While it is not recorded publicly who pulled the trigger, perhaps 100 years later is now a good time to record it for history. The facts are probably well known locally but, as an outsider, one may be forced to speculate unnecessarily.

There are two obvious possibilities: One, is it possible that this was a test for Barry and that in killing Mulherin he had finally proven his credentials? There is no direct evidence that Barry was active in the IRA before his formal recruitment.

Alternatively, but perhaps far less likely, is the possibility that the Essex Regiment got their men in arresting Tom Hales and Pat Harte? Finally, the truth might be unrelated to either and the recruitment of Barry was simply an unintended consequence of the killing. However, Mulherin’s death is surely of itself worthy of note, 100 years on.

Daithí Fallon is a native of Roscommon living in Innishannon. His grandfather was Quartermaster of the South Mayo Brigade, IRA. He believes his grandfather bought guns in Britain meant for his own brigade but were diverted to Tom Barry’s column by GHQ.