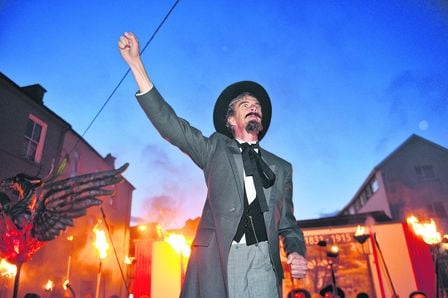 O’DONOVAN ROSSA’s biographer, Dr Shane Kenna has taken issue with the resurfacing of theories that the Fenian had changed his attitude to the British towards the end of his life.

In a recent article by Dermot Meleady, the writer asserts that O’Donovan Rossa’s hatred for Britain had faded in his old age.

The information comes from an article in the English Daily Telegraph in 1915, which claimed that the Fenian had ‘long ago lost all hatred, let alone prejudice against the British government’, and in fact held sympathy for the allied cause.

Further evidence is provided by The United Irishman, a newspaper that Rossa published during his time in New York that advocated violence as a means to end British oppression. Commenting on the Phoenix Park murders of 1882 in the paper, he said: ‘they (the assassins) shall not have one word of condemnation from us.’

But Dr Kenna, himself a well-known historian and author, believes these claims to be untrue and that such theories were falsified by the British.

Dr Kenna says the Telegraph report quoting O’Donovan Rossa was ‘not historically credible’, and was an attempt by the British government to win support for Home Rule and the Great War by using Rossa’s name.

According to Kenna, O’Donovan Rossa was suffering from dementia at the time he was reported to have made his statement in support of Britain, and his wife, Mary Jane, released a statement to that effect. This statement was printed in Rossa’s funeral booklet and was recently re-published.

John Devoy, another prominent Fenian, also described Rossa’s deteriorating health, noting that he ‘did not look at a newspaper in two years’.

‘(He) did not know that the Home Rule Bill had been passed and then suspended, did not know that a great war was going on in Europe and would not have understood it if he was told,’ he said. Devoy insisted that O’Donovan Rossa had died as he lived, ‘an unrepentant Irish rebel’.

Shane Kenna is the first ever full biographer of O’Donovan Rossa and the book, O’ Donovan Rossa: Unrepentant Fenian was published to coincide with the centenary commemorations. A re-enactment of Rossa’s funeral took place in Dublin on August 1st, and was one of many events that honoured the patriot around this time.

Skibbereen was abuzz with O’Donovan Rossa celebrations over July and August.