Ballinspittle man Joe Brennan took this photo from Garretstown beach on Monday last of the laying of the transatlantic cable for high speed internet, between Somerset and Nova Scotia, which came ashore here to create a link for Ireland 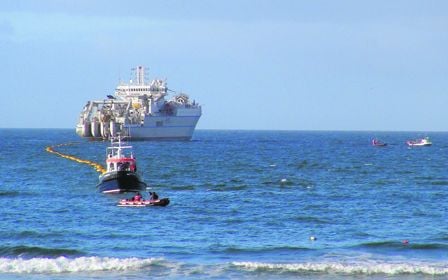 Ballinspittle man Joe Brennan took this photo from Garretstown beach on Monday last of the laying of the transatlantic cable for high speed internet, between Somerset and Nova Scotia, which came ashore here to create a link for Ireland

GARRETSTOWN Beach was the scene of an historic milestone earlier this week when a new €200m transatlantic fibre optic cable came ashore.

Known as ‘Hibernia Express’ and spanning 4,600km, this is the first transatlantic cable to be deployed in 12 years and will link Halifax in Nova Scotia to Somerset in England and Cork, connecting key centres of trade and commerce in Europe and North America.

Ready for service this September, this new cable is nearly triple the capacity delivered on current transatlantic systems and is being welcomed by Cork business leaders.

‘The addition of such a significant piece of enabling infrastructure to the region will add a vital new resource to our already strong multi-national sector working to enhance and facilitate further growth in the coming years, in addition to opening the region up to new sectors operating in cloud-based technologies and data centre provision,’ said Conor Healy, CEO of Cork Chamber.

Over the past week, the CS Resolute, a cable-laying vessel, has been working off the Old Head of Kinsale to install the fibre optic cable and it finally came ashore at Garretstown beach on Monday morning.

The cable was pulled through a duct along the seabed to a station close to Garretstown beach and will now be linked up the existing fibre optic network in Cork.

Minister for Agriculture, Food and Marine Simon Coveney TD said that this is a very positive development for Cork and for the wider economy.

‘The significant improvement in connectivity that this project will deliver will enhance the Cork region’s reputation and capacity for investment as well as strategically positioning Ireland generally as a leader in telecommunication with high speed international connectivity,’ said Minister Coveney. Hibernia Networks owns and operates a global network connecting North America, Europe and Asia, serving over 89 markets and spanning 25 countries.

‘Our customers are now just weeks away from having access to the most advanced submarine cable systems on the market. Financial firms, web-centric companies, media players and traditional telecoms service providers alike will benefit from the speed, diversity and scalability that Hibernia Express brings to the transatlantic corridor,’ said Omar Altaji of Hibernia Networks.