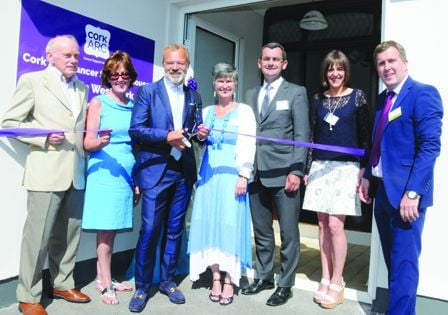 Graham is well known for his generosity and commitment to West Cork, but he shrugged it off saying: ‘I am doing nothing ... the good work here has been done already.’

Tricia Lyne, the West Cork Co-ordinator for Cork ARC, outlined the good work that has been done and the impact the cancer support house is going to have on the lives of the people of West Cork, particularly those who have been travelling to the city for cancer support services.

‘For those on treatment,’ Tricia said, ‘the last thing they want is to have to go up and down again to Cork – physically, emotionally, financially and time-wise, it’s just too much.’

Last November, she said Cork ARC began to explore how to set up services and from the very beginning the generosity and goodwill shown to them was ‘enormous’.

The initiative was made possible with the help of Cork ARC Cancer Support House and the Bantry Hospice Project, an organisation that Tricia said ‘really eased the way for us, not just with financial support but with their energy, efficiency and local expertise.’

Cancer Connect has also come on board and offered to bring people to and fro – an offer that makes the cancer support centre at The Bungalow at Gories in Bantry truly accessible to everyone in West Cork.

When the West Cork co-ordinator said ‘Cork ARC brings people together’ she was also referring to the people within the community who ‘stepped forward’ and offered help, inside and out – including interior design, landscape gardening and the provision of services.

Holistic services – such as counselling, massage and reflexology therapies – have been provided at The Bungalow at Gories since Tuesday, April 14th and it has been open every Tuesday ever since, from 10am until 4pm.

In addition to Tricia’s role as co-ordinator, there are nine volunteers working at the centre, including counsellors, a reflexologist, a touch therapist and listeners.

At the support centre, which offers services free of charge, visitors can expect to receive a warm welcome from one of the trained volunteers in a tranquil, safe and homelike atmosphere.

Tricia summed it all up saying: ‘Cork ARC brings people together; it offers a space where heartfelt human connections can be made and where healing can happen.’