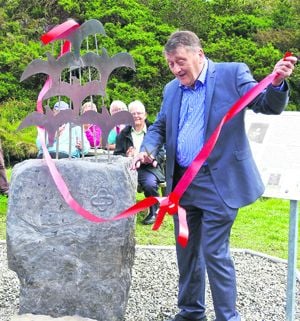 THE Goleen and District Community Council-led project, the Catalpa Six Sculpture, was unveiled in memory of Michael Harrington – one of the six so-called ‘Wild Geese’ from Goleen, last weekend.

In the 1850s, Michael Harrington was captured with five other colleagues, and jailed in Freemantle Australia, from where they later led a great escape on the ship Catalpa. The escape has been captured in many plays throughout the world, documenting the fact that up to a million people greeted the escapees on their arrival in the US.

Their exploits have been acknowledged all over the world – with sculptures in Freemantle, Massachusetts in the US, and now in Goleen too.

‘The Community Council have planned this stunning sculpture for some time and while we had to get planning for it, nothing would deter us from honouring these people,’ said Cllr Michael Collins, of the committee.

Actor Pascal Scott from TV show Kilnascully joined local historian Jim O’Meara and Susan O’Toole, who worked on the sculpture, at the pier near Heron’s Cove.