The late Paddy Hurley of Glandore. 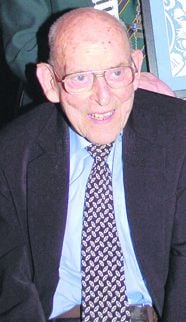 Paddy Hurley of Glandore, a place very close to his heart.

ONE man observed that ‘Paddy Hurley was over 6ft and had a towering presence, both in business and in life.’ One woman observed that ‘he was probably the most amenable man you could ever meet.’ Both statements are true and both are a mark of the man who lived well, and died peacefully, at his daughter’s home in Nohoval on May 15th last, at the age of 87.

Paddy Hurley of Glandore and Drinagh is the beloved husband of the late Sheila and loving father of Mary, Helen and Sinead. His passing is deeply regretted by them as well as his sons-in-law Martin and Dave, grandchildren Richard and Aishling, brother John, nieces, nephews and relatives. But Paddy Hurley is claimed by others too: he had a much wider family comprising every community, club and society in which he was known.

The Requiem Mass, celebrated by Fr Billy O’Donovan, a cousin of Paddy’s wife Sheila from Conna, Co Cork, was held in Kilfachtnabeg Church in Glandore, on Sunday. His friend, Charlie McCarthy said: ‘I have known Paddy Hurley almost all my life.’ And then he told a few stories that reminded people of Paddy’s towering presence.

Paddy came from a well known farming and business family at Stags View in Castlehaven. He went to boarding school in Blackrock in Dublin and he was the last surviving member of the team that won the Leinster Senior Cup during his years in the college, as prestigious a competition then as it is today. He was one of the first foreign exchange students through the IFA scheme and spent a number of months visiting farms in the US and returned with many new farming methods.

Paddy met and married Sheila and moved to Drinagh where he made many new friends. They had three daughters, Mary, Helen and Sinead, and he was justifiably proud of them and of his grandchildren.

Charlie McCarthy said he first got to know Paddy through the Skibbereen RFC, an organisation in which he held every office in the club – captain, chairman and president and was even named joint life patron alongside Tony O’Reilly.

‘Paddy,’ Charlie said, ‘was a fine 2nd row and also a gentle person. His great friend and 2nd row partner, the late Denis Calnan, always maintained that Paddy had to receive what today would be called ‘an incentive’ to rouse him into greater activity.

‘This incentive was then known as a punch or a boot. If the opponents on the day did not do this, Denis’s task was to administer the incentive without Paddy’s knowledge because this, in most games, ensured a successful result.’

Charlie said: ‘Paddy had a huge influence in the rugby club and took a great interest in all sections, especially at under age level. Through good and bad times he was a tower of strength and support and, in my opinion, the successful survival of Skibbereen Rugby Club owes much to the work of Paddy Hurley and a few more like him. ‘He took a great interest in supporting Munster and travelled to all the matches with his great friends: the late Liam O’Regan, the Moloneys, the Coughlans and Lar Casey. It was very appropriate and poignant to see the Munster flag flying at half-mast outsides Casey’s Bar in Glandore.

‘Paddy was also a founder member and president of Skibbereen Lions Club and took a great pride in their many successful projects, especially fundraising for many deserving charities. It is through the efforts of Paddy and others that it is now a very successful community-based organisation. Sean O’Neill, president of Skibbereen Lions said: ‘We’ll miss him greatly as he was the person to go to for advice or help whenever we had a question about how to do something. He also had a wonderful and cheeky sense of humour.’

Charlie McCarthy also said that ‘Paddy was great company and a very wise counsellor, which I experienced many times when I sought his advice. When he retired from a very successful farming and business career, he moved permanently to Glandore – the place that was closest to his heart..’

And, as if to sum him up in one sentence, Charlie said: ‘Everyone that met Paddy came away feeling the better for it and in good form. Talking to some of his friends over the past few days, we all agreed we never heard him speak badly of anyone – that, in short, was Paddy Hurley: a true gentleman and a good friend.’